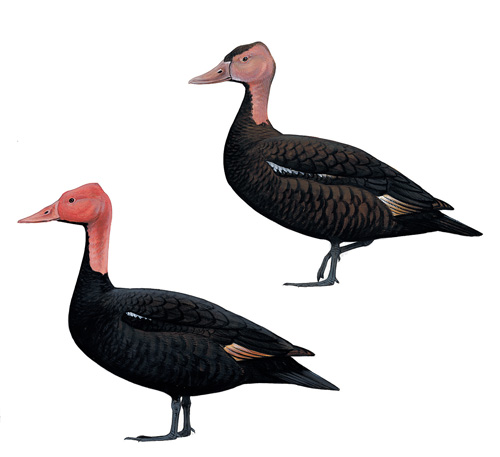 There is a certain amount of controversy over whether or not the Pink-headed Duck of north-eastern India still survives. Probably it does not, but there are those who believe it might and every few years or so an expedition goes in search of it. Thus far none of these expeditions has proved successful. This was a shy and wary bird that sometimes emitted a wheezy whistle and was always difficult to flush. Its rather secretive nature is one of the factors that encourages the optimists.

Against this it might be said that individuals were found without too much difficulty during the nineteenth century and early years of the twentieth, yet none has been seen in the wild since the 1930’s. On the water – where the birds spent most of the hot day – individuals showed a rather peculiar, stiff-necked posture and a strange triangular patch was evident on the top of the head. Despite some reports to the contrary, they seem to have been capable divers and were probably omnivorous feeders. Small groups sometimes gathered, particularly during the cooler months, and typically these groups consisted of six to eight birds, although sometimes the groups were considerably larger.

The birds were rarely seen in the air and descriptions of their mode of flight are mildly contradictory: one report suggests that it was rapid and powerful, while another maintains it was light and easy. Pink-headed Ducks bred in April and May and they built circular nests from dry grass and feathers. The eggs – white or faintly yellowish in colour – were almost spherical in shape and the clutch numbered between five and ten. The species was recorded from Assam, Manipur, Bengal, Bihar, Myanmar and Orissa. Curiously, the last Pink-headed Duck of all may have died in England, thousands of miles from its native home. A number of captive individuals were kept in a private collection at Foxwarren Park, Surrey, and a rumour suggests that a male bird may have survived until 1945.