Source to all birds on the Planet
admin
Africa, Anatidae, Anseriformes
Comments 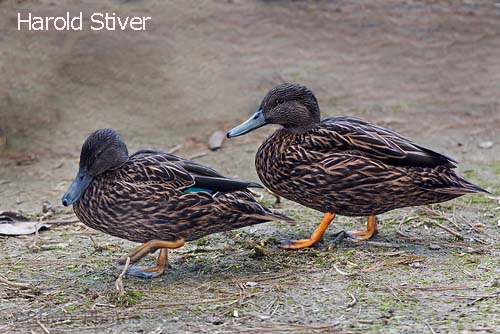 Large duck, rather dark brown all over, with narrow paler fringes to feathers on upperparts and wider fringes on underparts, superficially similar to a dark female Mallard A. platyrhynchos, but with no supercilium. Head is dark, upperwing has green speculum bordered narrowly by white, underwing conspicuously whitish. Paler grey, rather long bill, with varying dark patches at base. Orange legs and feet. Similar spp. Told from other wild ducks by lack of conspicuous white in upperwing, overall dark appearance, large size, long bill, and whitish underwings.

Africa : Madagascar. Anas melleri is endemic to Madagascar, where it is found on the eastern and northern high plateau, in eastern drainage patterns. There are populations on isolated massifs on the western edges of the plateau. Records from the west, below the plateau, probably refer to vagrant or wandering birds. An introduced population on Mauritius may persist if maintained through releases, although it is probably close to extinction.

This species occurs in inland freshwater wetland habitats from sea-level to 2000m. It is most often found in small streams that run east off the high plateau, but also inhabits lakes, rivers, woodland ponds and marshes, especially in humid forested areas. It is sometimes found in rice-fields. It favours slow-moving water but will inhabit faster-moving streams and rivers when the preferred habitat is not available. It rarely inhabits coastal regions. It especially breeds along small streams and backwaters around lakes11, and also probably along undisturbed river.

It has been recorded to breed as early as July. During the breeding season it usually occurs in pairs, and is highly territorial and aggressive towards both conspecifics and other duck species, with pairs defending territories of up to 2 km in length. Non-breeding birds often congregate in small groups, or occasionally in large numbers, with flocks of over 200 birds recorded at Lake Alaotra. The nest is constructed from dry grass, leaves and other vegetation, and is built among tufts of herbaceous vegetation on the ground at the water’s edge. Clutch size is 5-10 eggs which re incubated (in captivity) for 4 weeks. Young fledge after another 9 weeks.

This species forages mainly by dabbling, but may also forage on land. Its diet includes aquatic seeds and plants as well as invertebrates, particularly molluscs. In captivity small fish, chironomid flies, filamentous algae and grasses are also eaten. Its presence in rice-fields suggests that it consumes rice when available.

This species is listed as Endangered because it is believed to have a very small, although widely dispersed, population, all in one subpopulation, which is undergoing a continuing decline owing to intensive hunting, habitat loss and degradation, and disturbance.
A. melleri is among the largest species of wildfowl found in Madagascar and is widely hunted and trapped for subsistence (and for sport). Interviews with hunters at Lake Alaotra suggest c.450 individuals are taken each year, constituting 18% of the global population. Long term deforestation of the central plateau, conversion of marshes to rice-paddies and degradation of water quality in rivers and streams, as a result of deforestation and soil erosion, have probably contributed to its decline. Widespread exotic carnivorous fishes, notably Micropterus salmoides and Channa spp., may threaten young and cause desertion of otherwise suitable habitat. Its decline on Mauritius has been attributed to hunting, pollution and introduced rats and mongooses as well as possible displacement by introduced Common Mallard Anas platyrhynchos. Pairs are very territorial and susceptible to human disturbance.

This species is largely sedentary, although there exist some records from the west coast where it does not usually occur, suggesting that it may wander to some degree within Madagascar. Nesting usually takes place during the months of September-April, with the exact timing thought to be dependent upon levels of rainfall.