The common goldeneye,is named for its brilliant yellow iris. Common goldeneyes fly in small compact clusters, with their wings making a distinctive whistle at every wing beat. Male common goldeneyes have blackish iridescent green heads with a white circular patch between the eye and the base of the bill. The breast, sides, belly, and patch across the secondaries and secondary wing coverts are white. The back, rump, and upper tail coverts are black and the tail is grayish brown. The bill is black and the legs and feet are yellowish. Female common goldeneyes have chocolate brown heads, a whitish neckband, and speckled gray back and sides. The upper wings are brownish black with the middle five secondaries colored white. The bill is blackish becoming yellow near the tip and the legs and feet are yellowish.

Listen to the sound of Goldeneye

Nests are usually located near a pond, lake, or river, but may be found in woodlands up to a mile from water.
Common goldeneyes use brackish estuarine and saltwater bays and deep freshwater habitats during winter time

Common goldeneyes breed across the forested areas of Canada, Minnesota, Michigan, Alaska, and the northeastern United States. They are most abundant among lakes of the Canadian boreal forests, especially where lakes or deep marshes have substantial invertebrate populations. They are cavity nesters and have a strong homing tendency, often using the same cavity in successive years. Nests are usually located near a pond, lake, or river, but may be found in woodlands up to a mile from water. Female common goldeneyes nest in natural tree cavities, abandoned woodpecker holes, or nest-boxes and lay an average of 9 eggs.

Common goldeneyes use brackish estuarine and saltwater bays and deep freshwater habitats in the winter and dive to feed on a wide variety of available animal life. In inland areas during the summer and fall, they feed on aquatic insects, crustaceans and aquatic plants. Along coastal wintering grounds they feed largely on crustaceans, mollusks, small fishes, and some plant material.

This species has an extremely large range, and hence does not approach the thresholds for Vulnerable under the range size criterion (Extent of Occurrence <20,000 km2 combined with a declining or fluctuating range size, habitat extent/quality, or population size and a small number of locations or severe fragmentation). The population trend appears to be stable, and hence the species does not approach the thresholds for Vulnerable under the population trend criterion (>30% decline over ten years or three generations). The population size is extremely large, and hence does not approach the thresholds for Vulnerable under the population size criterion (<10,000 mature individuals with a continuing decline estimated to be >10% in ten years or three generations, or with a specified population structure). For these reasons the species is evaluated as Least Concern.
This duck inhabits the forested regions of northern Eurasia and North America, between 55 degrees N and 70 degrees N. It is breeding in tree holes. The birds visiting the European Union belong to two distinct populations. One is originating from Scandinavia, Finland and western Russia, and wintering mainly in the Baltic and the North Sea but also in smaller numbers on the continental waters of Germany and the lakes around the Alps. It comprises about 300000 individuals, and is constantly increasing. The second population has probably a more eastern origin and is wintering on the middle Danube and in the Adriatic region. It reaches north-eastern Italy and northern Greece. It amounts to about 75000 individuals, but its trends are not well known

Partial Migratory; winters at sea in North of range, or at lower latitudes South to Florida, Mediterranean basin, Southern Rusia and Eastern China, occasionally further South. At times well inland (e.g. Central Europe); present all-year in some areas of North West Europe. In North America some may move from the interior to the Atlantic and Pacific coasts and south along the Mississippi and Snake Rivers. Along the Atlantic coast, birds winter from Newfoundland to Florida and on the Pacific coast from the Aleutian Chain south to California. The St. Lawrence River and the Great Lakes also provide wintering habitat. 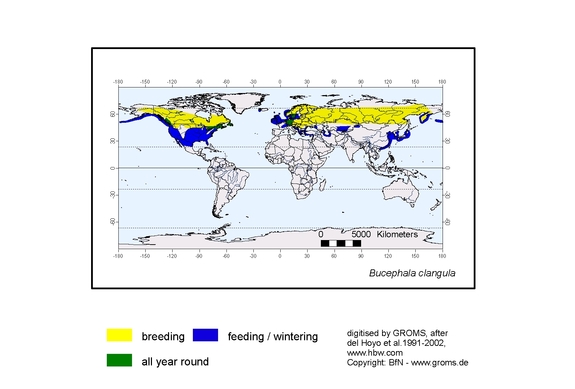