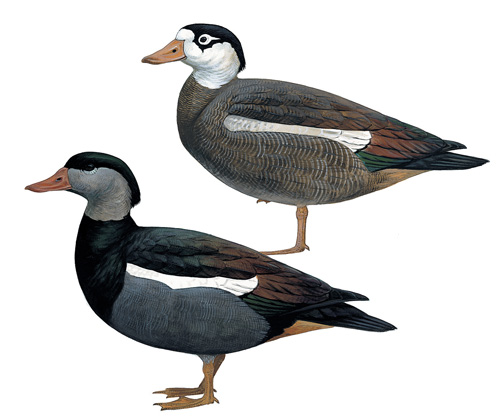 Only a very few specimens of this striking duck are in existence, and virtually nothing is known of it in life. Even the limits of its original range are a matter of speculation; there is an assumption that it bred in eastern Siberia and migrated to Korea and Japan, but this may be incorrect. It is not even certain that it is extinct, although hopes for its continuing survival are probably forlorn.

The most recently obtained specimen was taken in 1916 but a number of much later sightings are claimed, including a reported observation in southern China as late as 1990. Such unsubstantiated sightings should be taken with caution, but as long as tracts of potentially suitable habitat remain in unsurveyed areas, hope lives on. Although the earliest known specimen was taken near Vladivostock during 1877, the Crested Shelduck was not recognized as a species until 1917 when the Japanese ornithologist Nagamichi Kuroda formally described it.

Prior to this the form had been regarded as a hybrid between the Ruddy Shelduck (Tadorna ferruginea) and the Falcated Duck (Anas falcata). Despite the fact that this is now such a mysterious bird, it seems that it was well known historically to both the Japanese and the Chinese and it is said to be depicted on a number of antique artefacts.