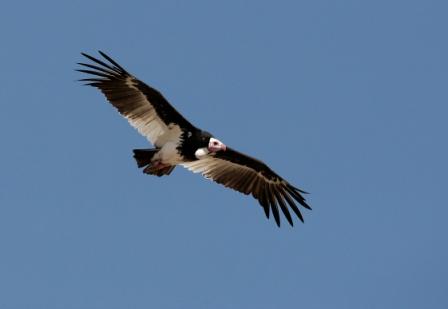 This species belongs to the largest of two clades of Old World vultures, which contains the genera Aegypius, Gyps, Sarcogyps, Torgos, and Trigonoceps. The four montypic genera of large Old World vultures will probably all be merged into a single genus, Aegypius. There are relatively small genetic distances between them, which are typical for intrageneric distances in other groups.

White-headed Vulture has dark brown plumage on neck ruff and breast band. Large wings are brown with white edges in median upperwing coverts. We can see a white line along the ends of greater underwing coverts. Flight feathers and tail are black. It has white throat. Lower breast, belly and thighs are white. White-headed Vulture has a broad, triangular, unfeathered head. It has white down on crown and nape, forming a slight crest. It has bare pink skin around the eyes, and in cheeks and fore neck. Hooked bill is orange with black tip. Cere is sky blue as base of the bill. Eyes are small and dull orange. Bare legs and talons are pinkish orange. Sexes are similar in size. Female has white inner secondaries, forming a white rectangular patch on the inner wing. Male has dark secondaries. Juvenile is dark brown with white head and brownish top of head, and white mottling on mantle. It has dark underparts. It needs about six years to reach its adult plumage. In female, rectangular white patches appear when it is two years old.

Africa : widespread. Trigonoceps occipitalis has an extremely large range in sub-Saharan Africa (from Senegal, Gambia and Guinea-Bissau disjunctly east to Eritrea, Ethiopia and Somalia, and south to easternmost South Africa and Swaziland), where it is uncommon to locally common, but generally widespread outside forested regions. It has declined rapidly in parts of West Africa since the early 1940s, and in southern Africa is now largely confined to protected areas. The species has probably declined in central Mozambique. An extrapolated estimate of the global population suggested there were 2,600-4,700 pairs (7,000-12,500 mature individuals).

It prefers mixed, dry woodland at low altitudes, avoiding semi-arid thornbelt areas1. It also occurs up to 4,000 m in Ethiopia, and perhaps 3,000 m in Kenya, and ranges across the thorny Acacia-dominated landscape of Botswana. It generally avoids human habitation. The species is thought to be a long-lived resident that maintains a territory. It may generally fly lower than other vultures, and is often the first vulture species to arrive at carcasses. While it is often found on the periphery of vulture congregations at large carcasses, it is also often found at small carcasses and is probably an occasional predator. It nests and roosts in trees, most nests being in Acacia spp. or baobabs. Clutch size is one, the egg being laid a couple of months after rains have finished and the dry season is underway1. Pairs that breed have a success rate of 65-75%, however, up to 61% of pairs do not attempt to breed each year.

White-headed Vulture’s nest is situated on the top of a tall tree, such as a baobab or an acacia, emergent from surrounding woodland. Nest is a large platform made with sticks, and sparsely lined with dried grasses. Little by little, this lining becomes covered by disintegrated pellets. Breeding season occurs from May to August. This species nests solitary. Female lays only one white egg, spotted with reddish-brown and lilac. Incubation lasts about 55 to 56 days, by both parents. Chick is fed by both parents, by regurgitation mouth-to-mouth. It remains at nest about 115 days, where is fed by adults. After fledging, parents feed it at nest during six months more.

Mainly carrion but also kills small prey such as mammals and birds as well as taking insects such as termites. They usually stand at the edge of flocks of other vultures species, because they prefer to feed alone. But, they can dominate other vultures when necessary. This vulture is usually the first to find a carcass, and to land and start feeding. It prefers to walk off with a piece and feed alone.

This species has a small population which constitutes a single metapopulation as there is presumed to be movement of individuals within its large range. It is listed as Vulnerable because information from across its range indicates that numbers are in decline owing to a variety of threats.
Reductions in populations of medium-sized mammals and wild ungulates, as well as habitat conversion throughout its range best explain the current decline. Additional threats include indirect poisoning at baits set to kill jackals in small-stock farming areas, although this species is less susceptible than other vultures owing to its broad diet. Exploitation for the international trade in raptors also poses a threat. In 2005, 30 individuals of this species were confiscated by the Italian authorities. In South Africa, this species is captured for use in traditional medicines. Breeding birds may readily desert nests in areas of high human disturbance. In 2007, Diclofenac, a non-steriodal anti-inflammatory drug often used for livestock, and which is fatal to Gyps spp. when ingested at livestock carcasses, was found to be on sale at a veterinary practice in Tanzania. NSAIDs are reportedly toxic to raptors, storks, cranes and owls, suggesting that vultures of other genera could be susceptible to its effects. In addition, it was reported that in Tanzania, a Brazilian manufacturer has been aggressively marketing the drug for veterinary purposes and exporting it to 15 African countries.

Sedentary with some post-breeding movements by juveniles