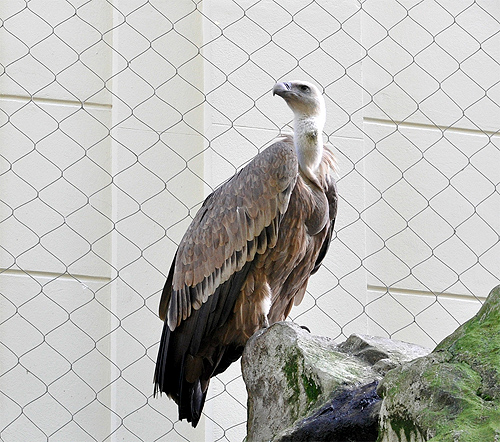 Members of the genus Gyps are vultures varying in size from medium to large. They have an elongated head with a long and heavy beak. The head and neck are bare, but for a covering of woolly down. At the base of the neck is a ruff of long, narrow, pointed feathers. This is a social genus, usually nesting in colonies in trees or on rocky crags. There are seven species, covering much of Africa, southern Europe and into Asia. Of there, two (the African White-backed Vulture Gyps africanus and the Indian White-backed Vulture Gyps bengalensis ) are arguably more logically places in a genus of their own. They differ in that they have 12 tail feathers (not the 14 that all other Gyps have), their nesting habits differ, and they have a distinctive coloration that differs significantly from the rest of the genus.

The Griffon Vulture immediately betrays itself by its size (L 100 cm) and characteristic pale colours, contrasting with dark colours of wings and tail. The species normally breeds colonially on cliffs (rarely in trees) mainly in mountainous regions. They inhabit a wide variety of open areas with few or no trees, where they feeds mainly in carrion. Resident.

Listen to the sound of Griffon

The largest numbers of Eurasian Griffon Vultures are found in Spain, but there are significant populations in Turkey, Gibraltar, and Bosphorus. They favor the more southern parts of their range, and can tolerate inclement weather such as rain, mist, and snow fairly well. Though they avoid wetlands and marine areas, they are very fond of fresh and running water, for bathing and drinking.

Griffons pair for life. They build nests of grass and twigs on cliff ledges. Mating takes place on the same steep cliff faces where the birds construct their nests, and the female lays one or two eggs 2 months after mating. Both parents tend the egg. Model parents, the griffons incubate their eggs by night, and shade them by day, as the temperature rises. Incubation lasts from 48 to 52 days. The young remain in the nest for 4 to 6 months. They can live upto 40 years. The griffon vulture is not teritorial and nests of several pairs can usually be found on nesting grounds.

One of the Old World vultures, Griffons cannot smell. They find food by soaring high, scanning the land for signs of a kill, or for stationary bodies. Often, the vultures will wait on the outskirts of a feeding frenzy, closing in once the mammalian scavengers have gone. Their weak beaks are not designed for ripping open fresh hides. They depend on predators or larger vultures to begin the work for them. Once they can access a carcass, the vultures will gorge themselves. Their crop can hold up to 13 pounds of meat

This species has an extremely large range, and hence does not approach the thresholds for Vulnerable under the range size criterion (Extent of Occurrence <20,000 km2 combined with a declining or fluctuating range size, habitat extent/quality, or population size and a small number of locations or severe fragmentation). The population trend appears to be increasing, and hence the species does not approach the thresholds for Vulnerable under the population trend criterion (>30% decline over ten years or three generations). The population size is very large, and hence does not approach the thresholds for Vulnerable under the population size criterion (<10,000 mature individuals with a continuing decline estimated to be >10% in ten years or three generations, or with a specified population structure). For these reasons the species is evaluated as Least Concern.
Gyps fulvus is a widespread but patchily distributed resident in southern Europe,
which accounts for less than half of its global range. Its European breeding population
is relatively small (<21,000 pairs), but increased substantially between 1970-1990. Although the species continued to decline in Turkey and the Caucasus during 1990- 2000, most other populations-including the Spanish stronghold-increased or were stable, and the species underwent a large increase overall.
This vulture inhabits southern Europe, North Africa and from south-western Asia to southern China. Most European birds are sedentary. The population of the European Union amounts to 8800-9000 breeding pairs. Because of heavy persecution and poisoning it has strongly declined since the middle of last century. More recently changes in the methods of raising domestic livestock have reduced the availability of the Griffon Vulture’s food. Since 1970 however Spanish and French populations have increased, mainly thanks to effective protection measures and withdrawal of long-lasting pesticides. In France its breeding distribution has even been extended through a reintroduction programme. In Italy, Portugal and Greece the decline is still in progress

This Vulture is resident and partially migratory, the latter probably mainly immatures. The biggest European population is found in Spain, mostly resident. The juveniles can wander southward in autumn, recoveries within Spain up to 600 km south of natal colony and exceptionally in Morocco. A Small-scale passage across Straits of Gibraltar has been observed spring and autumn. Limited southward passage occurs around east Mediterranean in September-October. Birds cross Bosporus each autumn; numbers augmented by some local birds during passage across Turkey, where mainly summer visitor to most regions though probably largely resident in south and south-west. Narrow-front passage over north Gulf of Suez (water crossing of 12-13 km), heading south-west in October, north-east in February-March. Winter range apparently north-east Africa but little known due to low numbers involved.