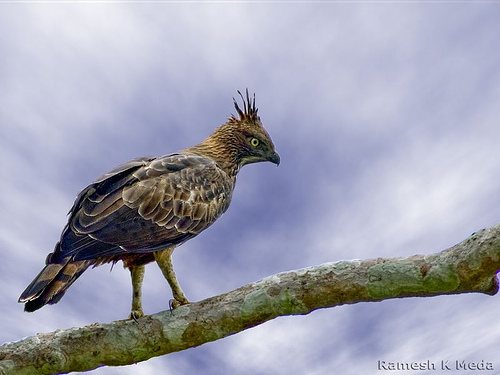 Members of the genus Spilornis are mostly rather large hawks, ranging to rather small. Essentially there is only one widespread form from India to Celebes and the Philippines, with many well-marked island forms. Only on the Andaman Islands has there been a `double invasion’ with two spccies co-existing, and even they appear to be separated ecologically with one living inland and the other in the mangrove swamps. The Celebes and Philippine forms are recognised as distinct; as are some of the dwarf races of the Nicobars and Sumatran Islands.

In most parts of its range it is easily recognised in adult plumage by the single white or pale median tail bar and in flight by the conspicuous black terminal and one or two other black bars on the pale flight quills. At rest the crest is not usually noticeable, and in dark forms does not contrast strongly with the back. It does not have the same heavy-headed appearance that characterises members of the genus Circaetus or Terathopius . In flight the wings are very rounded at the tips, held straight out from the body or rather above it, and the tail, in some races, appears long in relation to body and wings. At close range the brilliant yellow eye, and yellow legs and feet are characteristic. Immatures, dirty whitish below and mixed brown and white above, are best recognised by their silhouette in flight similar to adults, but with a different pattern of barring on wings and tail.

Listen to the sound of Crested Serpent Eagle

Oriental Region : widespread, including one form on Great Nicobar Is. The Crested Serpent Eagle is resident in tropical continental Asia from India east to south-east China, and the Malaysian and Indonesian regions south to Bali and east to the Philippines.

A forest or woodland bird, often found in dense rain forest, hunting below the forest canopy. In other areas it can be seen in open savannah, and is very adaptable in its needs. Its most characteristic habit (by which it draws attention to itself very often) is to soar above the countryside calling loudly at intervals. At other times it is a very unobtrusive bird, difficult to locate and observe. The home range of a pair, in areas where they are common, can be as little as two square miles, with the breeding areas of adjacent pairs sometimes no more than a mile apart. The birds frequent cultivation, villages, forest. and woodland, but the range will always include at least some forest or patches of tall trees, either in a river bed or as a pure stand on uplands. They can be tame and confident, allowing close approach.

Soaring with noisy calling is the most usual form of display. More vigorous forms of display include stooping and rolling, with the wings half closed and the tail raised, the wings sometimes rapidly vibrating or shivering.
The nest is a small structure for the size of the bird, usually built anew each yearin the same general breeding site (but not necessarily the same tree). It is made of small sticks, lined with green leaves, and situated at any height from 20 to 70 feet up or more, often near a stream. It is about two feet in diameter, and a few inches to one foot deep, with a deep egg cavity four to six inches deep. Both sexes build, but are secretive and not easy to locate at this time.
One egg only is laid, the timing varying enormously throughout the range. ln the northern part of the range the tendency is for the eggs to be laid in the cool dry season, with a more elastic season possible in equatorial latitudes or tropical rain forests.
The female alone incubates for about 35 days. At first the young eagle is sheltered by the parent , but it is soon left for long periods. At 21 days feathers begin to appear through the down, and it can then stand shakily. At 30 days it is mostly covered with feathers and can stand well. It can defecate clear of the nest edge at an early age, and when only 20 cm long one has been known to swallow a snake 60 cm long, taking one-and-a-half hours over the process. lt can withstand repeated soakings from tropical rainstorms, but is distressed by strong sun. It makes its first flight at about 60 days.
Both parents bring prey to the young, the male more in the early stages. The female remains near the nest or on it, and returns to it from time to time to shade the young from the sun, or to bring a green branch. At first prey is torn up by the parents into small pieces and fed to the young, but before very long the young can feed itself.
After leaving the nest the young may be seen soaring with its parents, and is probably dependent on them for some time. It appears to suffer frequent mishaps to its eggs or young, and the breeding success is low in relation to the number of attempts made; up to three out of four losing their eggs before hatching.

Chiefly reptiles, tree snakes especially, but also some lizards. It will pick up dead snakes as carrion. Also a few small mammals, and rarely birds. It is not a danger to gamebirds or poultry. All prey is taken on the ground. Most of the prey is taken from perches, and seized on the ground. The normal method of killing is to drop almost vertically on prey after sitting immobile, sometimes for hours, on a perch. It does not perform any spectacular stoops when hunting, and when circling in the air is not usually hunting. It also takes dead snakes when it can find them.

It is resident and non-migratory wherever it occurs, and seldom occurs at high altitudes, though it may occasionally be found in mountain forests up to 10,000 feet.