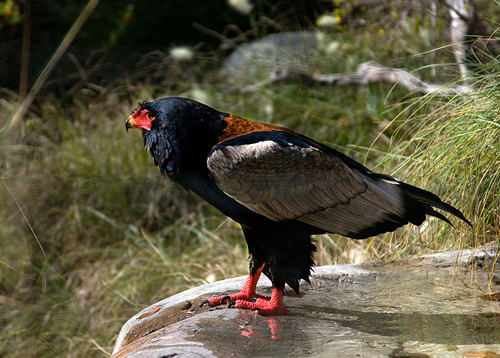 The Bataleur Terathopius ecaudatus is the sole member in the genus. Terathopius is the sister genus of Circaetus.The Bateleur is probably most closely related to Circaetus, and this species and the Short-toed Eagle (Circaetus gallicus) form a closerelationship. Even though they differ greatly in plumage patterns, they show similarities in food, feeding behavior, and breeding biology.

Mid-sized, oddly-proportioned eagle, with very long pointed wings, ‘tailless’ appearance and bushy head. Wings held in a deep ‘V’ and flight fast with distinctive side to side tilting action. Males generally black but with chestnut from mantle to tail, brownish-grey shoulders, white underwing linings and bare red face and legs. Females have more extensive white underwings and grey secondaries. Juveniles are all brown with blue-grey cere, face and legs and longer tail

Africa : widespread. Terathopius ecaudatus has an extensive range across much of sub-Saharan Africa (from southern Mauritania, Senegal, southern Mali and Guinea east to central Sudan, Ethiopia and west Somalia and south to Namibia, Botswana and northern and north-eastern South Africa), and also occurs in south-west Arabia (south-west Saudi Arabia and Yemen). Its global population is estimated to be 10,000-100,000 individuals. There have been significant population declines and/or range contractions suspected in many regions, including Botswana, Cote d’Ivoire, Kenya, Namibia, Nigeria (an estimated decline of at least 50 % in 30 years and now essentially confined to protected areas), Somalia, South Africa, Sudan, parts of Zambia, Zimbabwe, and possibly parts of Tanzania, in some areas, however, the species is not declining and remains widespread and common.

Savanna and open- and closed-canopy woodland, incl arid Acacia savanna, Mopane Colophospermum mopane and miombo (Brachystegia) favouring broad-leaved woodland with long grass. Rarely in heavily wooded areas, mountainous areas and largely treeless habitats, but penetrates semi-desert shrubland with tall drainage-line woodland from sea level to 4,500 m but generally below 3,000 m. It is generally considered resident but some adults as well as immatures are nomadic. It takes both live and dead food, mostly mammals and birds but also some reptiles, carrion, insects and occasionally birds’ eggs and crabs, foraging over a huge range (55-200 km2). The nest is built in the canopy of a large tree, and breeding is chiefly September-May in West Africa, throughout the year in East Africa and December-August in southern Africa.

The female will lay single egg in a nest that sits in a large tree that offers protection. Mother incubates the egg while father collects food and sticks for the nest. Sometimes, however, the father incubates. After an incubation period of 52-59 days, the chick hatches. 110 days later, the hatchling fledges, but will continue to receive food from its parents for another 100 days. Only 2% of chicks make it to adulthood.

This species has been uplisted to Near Threatened because it is suspected to have undergone moderately rapid declines during the past three generations (41 years) owing to habitat loss and incidental poisoning and pollution, and is consequently believed to approach the threshold for classification as Vulnerable.
Putative reasons for declines vary, but include poisoned baits, pesticides, trapping for international trade, nest disturbance from spreading human settlements, and increased intensification and degradation of agricultural land. The major cause of the decline seems to be almost entirely poisoning by a few large-scale commercial farmers, but poisoning is also a problem in tribal small-stock farming communities. Range has contracted significantly over last 100 yr, now almost entirely dependent on protected areas. Previously subject to direct persecution, but birds that stray outside protected areas now mainly killed by poisoned bait put out for jackals.

Adults resident but juveniles highly nomadic, wandering away from the breeding sites. Vagrants reported from Israel and the Arabic Peninsula.