Source to all birds on the Planet
admin
Charadriiformes, Recurvirostridae
Comments

Hutton in 1871 describes it as follows: Head, neck and lower parts, dull black ; back and wings, greenish black; tail, black ; forehead, cheeks and throat, grey. The young have the whole under surface, and over the tail, white ; the inner webs of the lateral tail feathers white, with black tips. It is known to inhabit both Islands of New Zealand.

The black stilt breeds early in the season, on sandy river-beds. It is stated that the labour of nidification is very trifling. Sometimes a nest is made of grass, but, more frequently, a slight depression in a sandy spit answers all requirements as a nesting place. The nest is never very far from the water. The female lays three or four eggs, and the young can run almost as soon as they are hatched. When disturbed, they conceal themselves behind stones, or some other shelter, in the most artful manner. The parent birds exhibit the utmost assiduity in attempting to lead intruders from their eggs or young, and their numerous cunning devices are carried on with surprising cleverness and perseverance. When walking or running over the flats, or wading in shallow water, the stilts are graceful birds; but their flight, with their long legs stretched out behind them, is clumsy. On the wing they constantly utter a sharp cry, something like the bark of a small dog. 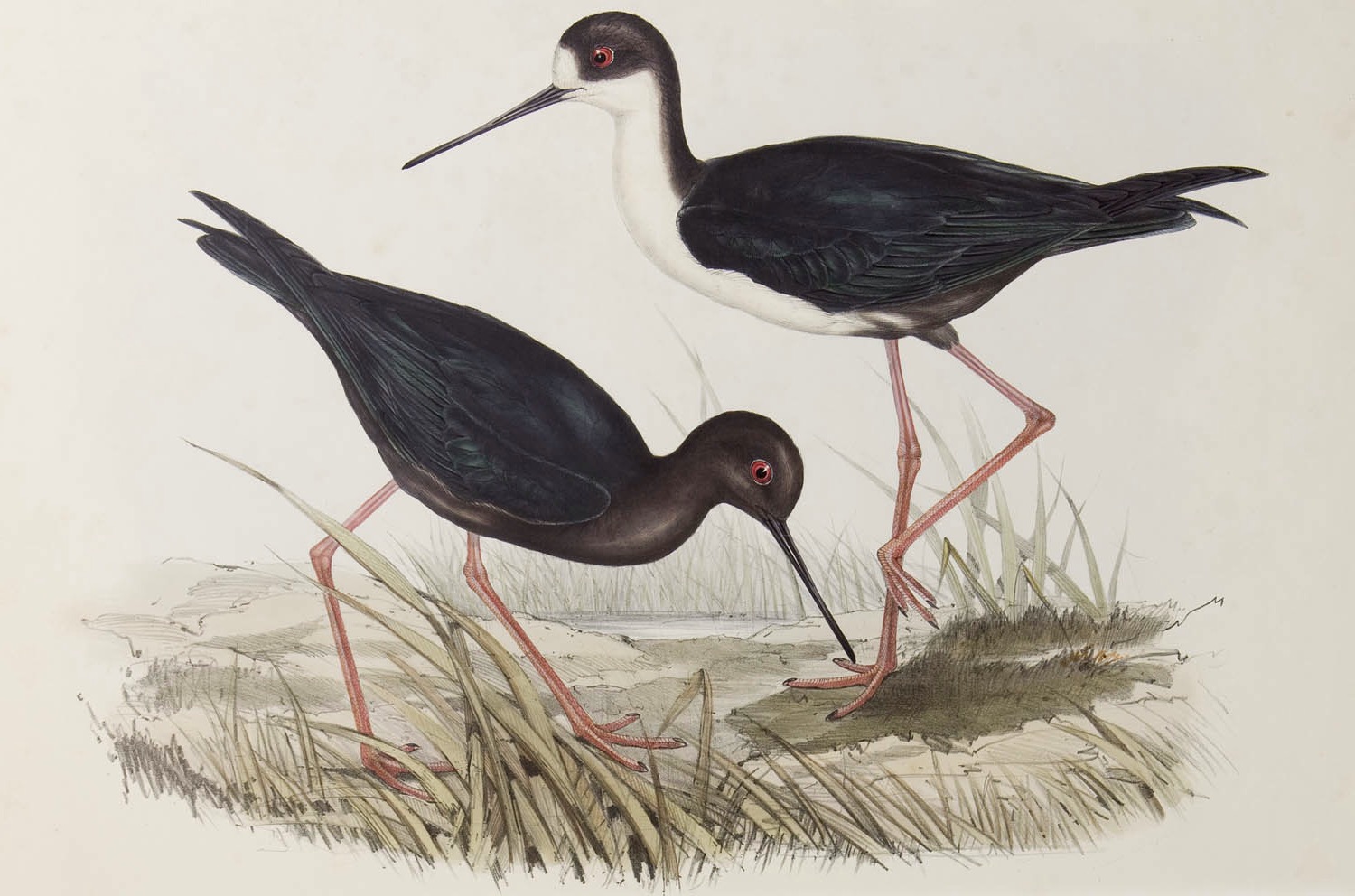 In early days ornithologists disputed its species status:
In 1868 this was written in the Transactions and proceedings of the New Zealand Institute: “We have been told that there is not a Black Stilt, that the Black Stilt, so called, is, in reality, but the pied species in an immature state of plumage. To this we cannot for a moment subscribe, we have never once found the two species breeding together or using the same, or even similar situations, for their nesting-place. Neither Mr. Buller nor Dr. Finsch, we remark, admit this bird in their lists, but, with the utmost deference to those authorities, we cannot consent to give up such an old acquaintance as the Black Stilt.

Buller in 1882: Both Islands. It may readily he distinguished from the New Zealand Pied Stilt by its darker plumage, and by its somewhat shorter legs. Its habits, however, are similar, excepting that it is less gregarious, associating in pairs rather than flocks, while it appears to prefer the dry shingle-beds to the lagoons and marshy grounds which constitute the favourite feeding-resorts of the other species. It is, moreover, a much rarer bird, although it is generally to be found in all the river-courses of the Wellington Province, and further south.

The value of the black and pied stilt species in their haunt becomes obvious in this quote:
Hughes in 1885: Both of these occur very plentifully, and breed on the islands in the harbour and on the river-beds. The vigilance of these birds is extremely annoying when in pursuit of ducks, as their harsh note of warning is quickly appreciated by any ducks in the neighbourhood.

The pedigree is also subject of much speculation:
Seebohm in 1887: The similarity of the winter plumage to that of the Australian Stilt proves the close relationship of the two species. The Black Stilt doubtless emigrated either from Chili or from Australia to New Zealand, and acquired in the latter country a special nuptial dress, the result, in all probability, of sexual selection. 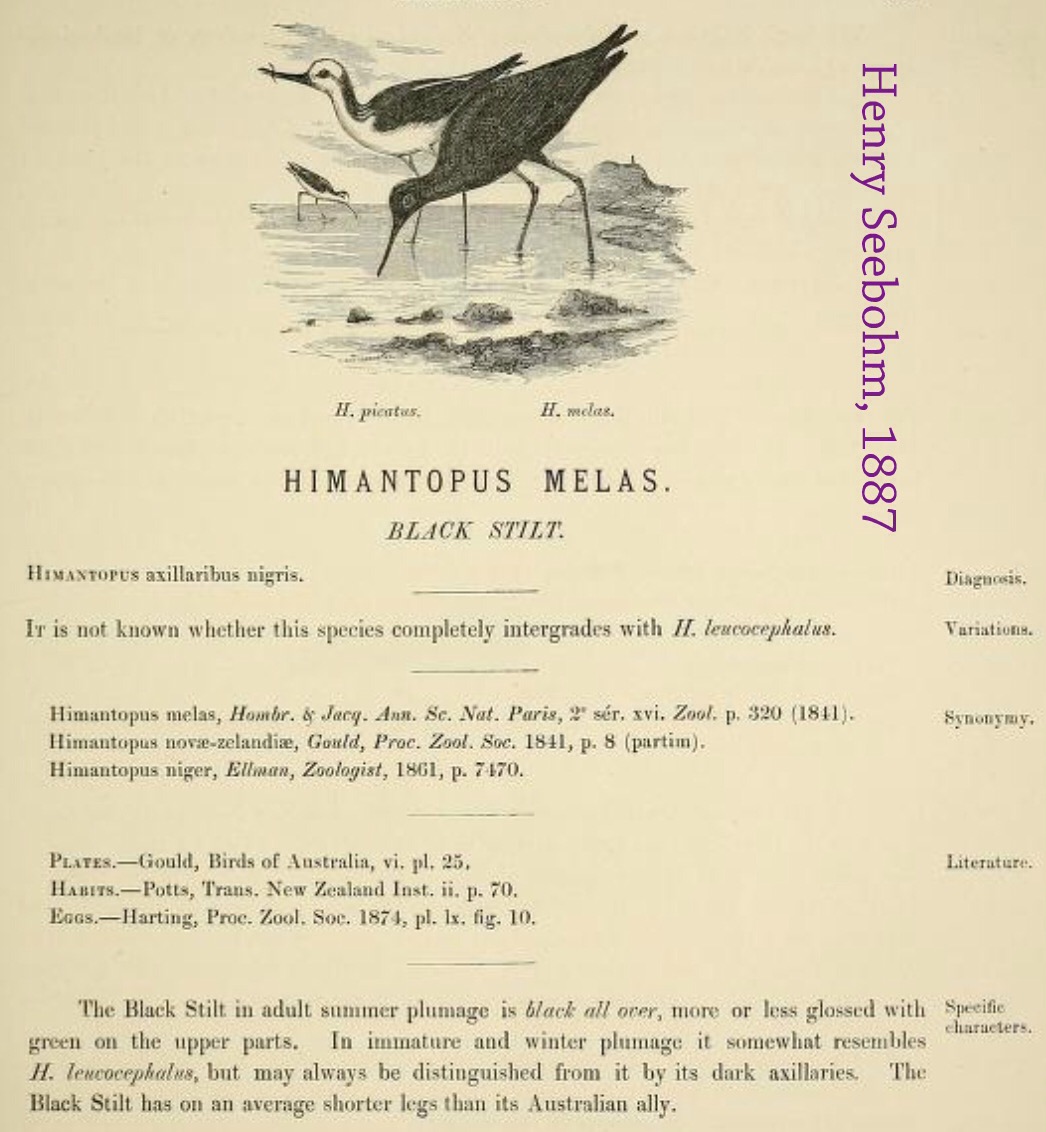 Obviously Black stilts were widespread during the last half of the nineteenth century. There are, however, no records of black stilt nesting pairs in the North Island during the twentieth century. During the early part of the 20th century, they were already declining in numbers and range. Black stilts were common in the upper Waitaki river basin during the 1930’s and 1940’s. A major population decline occurred in the inland population during the early 1950’s, about 20 years later than in the coastal areas. During the 1960’s, breeding became largely confined to the upper Waitaki basin, with only isolated records of birds breeding elsewhere.

In the 1962 breeding season, only 68 adults were recorded. Since 1977, black stilts have been found nesting in valleys of the Ahuriri, Hopkins, Dobson, Ohau, Tekapo, Tasman, Cass, Godley and Macauley rivers, and at kettleponds near Lakes Ohau and Tekapo (Pierce 1984a).

It continued to decline to a low of just 23 birds in 1981, when intensive management began. In 2001, the wild breeding population consisted of just seven pairs, but a maximum of 84 adults were recorded in the wild in August 2002. In 2012 the free-living population was around 130 individuals. The apparent increase is largely thanks to the annual release of captive-bred subadults and juveniles (93 birds in 2007-2008).

In 1991 a program was already in progress: In South Island, Black Stilt Himantopus novaezelandiae eggs are being hatched both artificially and by the related Pied Stilt H. leucocephalus.(newsletter for birdwatchers). The species is monogamous and birds pair for life. It lays four eggs and will usually re-nest if the first clutch is lost early in the season. Both birds in a pair share incubation duties. Most breed for the first time at three years of age. The average age is 6.8 years, and there are two birds that are older than 10 years.

The single greatest cause of the decline in the black stilt population has probably been the combined effects of introduced mammalian predators. During the late nineteenth century, several small predators (weasels) were introduced to control the spread of rabbits. Also, in the 1870’s, for the same reason, many farmers imported large numbers of cats. These introduced predators had a devastating effect on native birds. Other major threats are:

Habitat loss mainly by hydroelectric and agricultural development and weed invasion.
Human disturbance by recreational users of riverbeds and wetlands

The main conservation action is to release reared adults in to the wild and monitor their survival. Next to this several actions are on-going:
Trapping for and fencing against predators around all wild nests has been on-going since 1997
Water-levels are manipulated in managed wetlands to attract birds to feed.
The introduction of a second population on a suitable predator-free island is desirable and has undergone a feasibility study, but it is unlikely that a suitable release site will be found.
Encourage public interest and support.
Continue efforts to prevent hybridisation with H. himantopus

Breeds early in the season, seeking the sandy river-beds for that purpose. The labour of nidification is very trilling, sometimes a nest of grass, etc., is roughly constructed, now and then this apology for a nest may be discovered on a log of drift-wood; much more frequently, however, a slight depression in the sandy spit, answers all the requirements of this Stilt, as a nesting-place ; it is never very far from water. It may seem the nesting is not very specialized, but in the action plan (1991) the following reasons are given as to its decline:

Black stilts nest as early as August, a time when predators are likely to be hungry due to low numbers of their main food, rabbits.
Black stilt nests are often sited on the banks of small streams and side braids of major rivers, habitats which are heavily frequented by predators
As black stilts presently nest as solitary pairs, sometimes several kilometres from other nesting black stilts, they are without the added advantages accrued to nesting in colonies (eg. extra ability to detect and drive away predators). Chicks tend to forage over a greater area than those of colonial nesting pied stilts making them more vulnerable.
Pied stilts normally perform distraction displays (e.g. “broken-wing” at all stages of incubation, whereas black stilts rarely perform them until late in incubation or when chicks are hatching.
Black stilts have a longer fledging period (hatching to flying, 39-55 days) than do pied stilts (30-37 days). The extra time spent on the ground increases vulnerability of the chicks to predation and late broods may be present in February when predator young are dispersing and predator density is greatest.
The black stilt does not share the disruptively camouflaged plumage of other riverbed waders making it easier for predators to locate adults, nests or young. 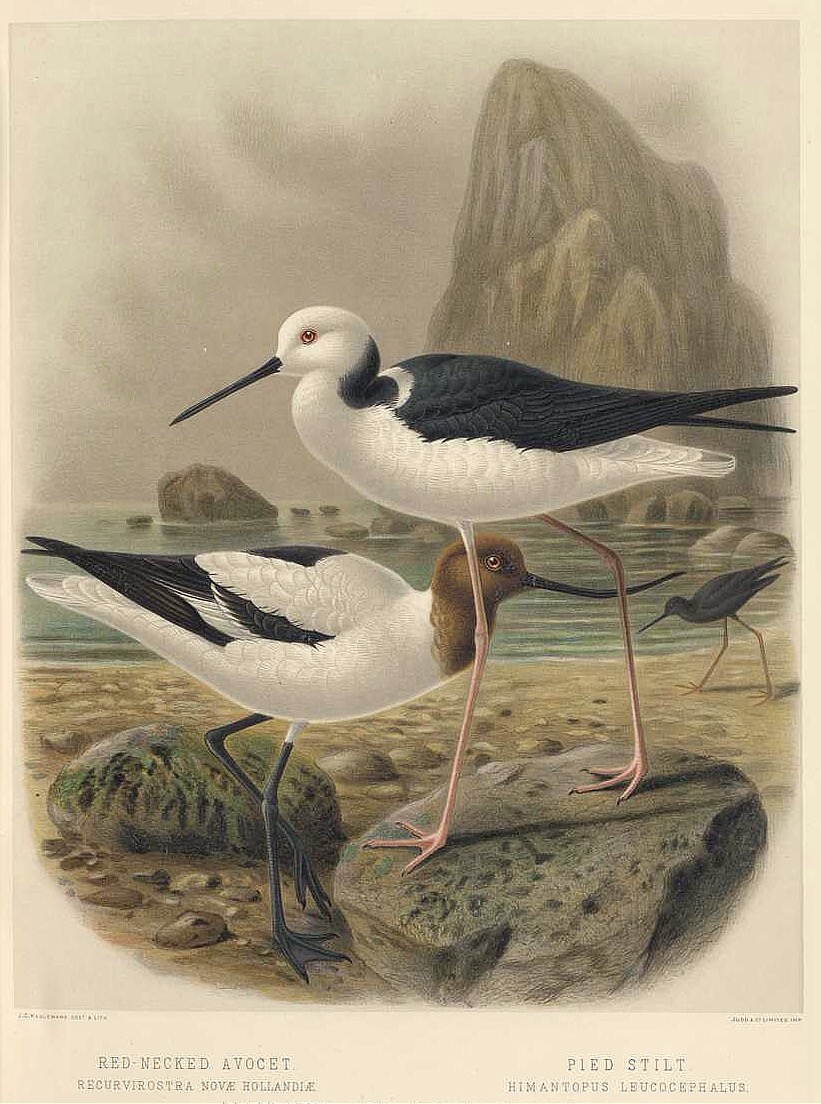 We, at Planetofbirds, think the Black Stilt will survive providing the predation can be halted. The species will, be it in a partially artificial environment, prove to be tolerant enough to extend the “wild” population. One more species living in a day care center.