The Red-headed Vulture (Sarcogyps calvus) or Indian Black Vulture or King Vulture or Pondichery Vulture has shown an extremely rapid decline in numbers in the last decade. This reduction in population is probably ongoing in the near future. The main reason for this steep decline is the veterinary drug diclofenac which is widely used in live stock. The carcasses of the animals which are fed upon by the Vulture are contaminated with this drug.
It is 80 medium-sized bulky vulture. It is a mainly black vulture with a bare red head, neck and legs. It also shows white thigh-patches and ruff near the legs. The irides in this species are usually of a reddish brown, but in some specimens are yellow; the cere and bare skin of the head and neck are of a deep yellowish red, and the legs and feet of dull red colour. 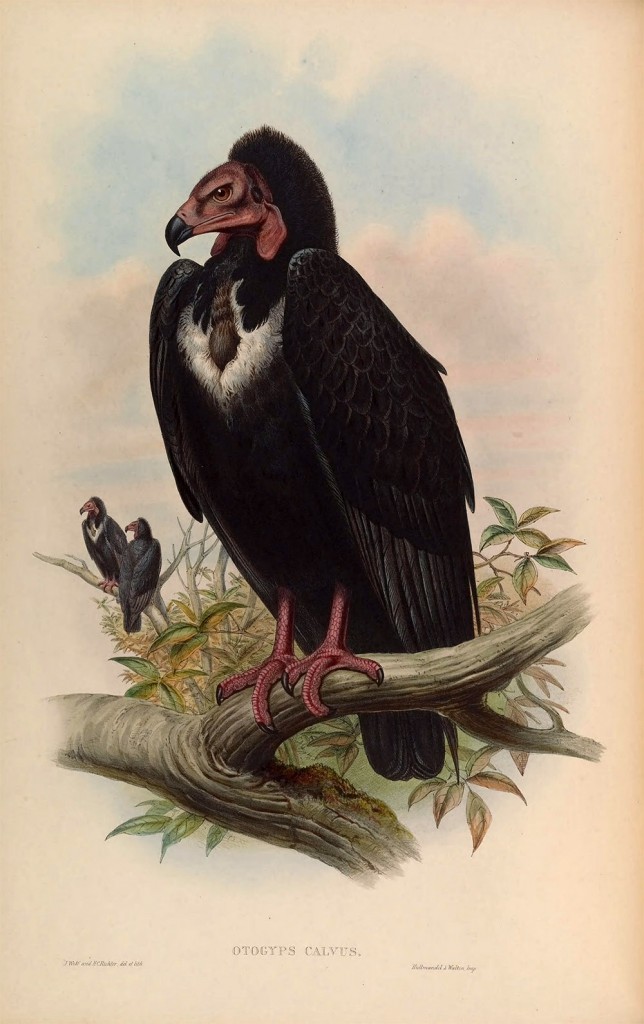 Salim in 1955: Size: Peacock minus the train. Field Characters: A huge, black, turkey-like vulture with deep scarlet naked head, neck and legs. In overhead flight a whitish band on underside of wings prominent; also white patches on upper thighs and at base of neck. In sailing, wings held above plane of body in a wide V. Sexes alike. Singly on the countryside.
It is a carrion-feeder, usually present singly or in twos and threes among all vulture gatherings at animal carcases. Far less gregarious than the Bengal Vulture. It has a false reputation for boldness and audacity and for monopolising a carcase until it has had its fill of the choicest tit-bits. Actually it is timid and cowardly, keeping deferentially aloof of the scrimmage, sneaking in and hurriedly withdrawing with a gobbet of flesh only when the pressure of the other feasters has momentarily eased.

Gurney in 1864: The Pondichery Vulture lays a single white egg; its nest, which is large, is formed of sticks, and is placed on trees, and, it is said, frequently also on inaccessible cliffs; and the nest of various other birds are often found on the same tree, and do not appear to be in any way disturbed by the vicinity of the Vulture. The male of this species has been observed to perform the duty of incubation, which it no doubt shares with the female. The Pondichery Vulture is usually found in pairs, but four or five may sometimes be seen together when attracted by food.

It frequents open country usually away from human habitation, well-wooded hills and dry deciduous forest with rivers, usually below 2,500 m. Nesting has been recorded in tall trees. It occurs at lower density than Gyps vultures owing to its predominantly territorial behaviour, and movements are poorly known. Vultures play a key role in the wider landscape as providers of ecosystem services, and were previously heavily relied upon to help dispose of animal and human remains in India.

Historical reports indicate that it was widespread and generally abundant, in India the species declined by 91% between the early 1990s and 2003. Declines in the Indian Subcontinent have followed declines in Gyps vultures owing to mortality following ingestion of the non-steroidal anti-inflammatory drug (NSAID) diclofenac, used to treat livestock, which is also responsible for the decline in Red-headed Vulture. Another reason behind its decline in the region is thought to be a lack of available carcasses for vultures, domestic animals are better farmed than before. Given its rarity in South-East Asia, it is unlikely that more than a few hundred individuals remain there, while the total population seems unlikely to exceed 10,000 mature individuals given the patchiness of its distribution across India and the apparently catastrophic very recent declines. In Cambodia at least it experiences some decline through the use of poisons to catch fish or waterbirds. 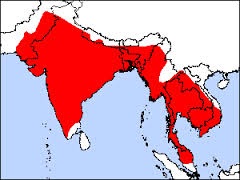 The governments of India, Nepal and Pakistan banned diclofenac in 2006, India in 2008 and Bangladesh in 2010. This has led to a reduction of diclofenac within carcasses (the principal food source for vultures), but levels of diclofenac are still high for veterinary use. An alternative drug, meloxicam, which is out of patent and manufactured in Asia has been tested on Gyps vultures with no ill-effects. Other conservation measures that showed effective are raising awareness, stimulating protected feeding areas and promote captive breeding programs.

We, at planetofbirds, think this Vulture will survive in low numbers and will probably become dependant on human controlled feeding (restaurants). The ungulates (hoofed live stock) are managed much better by the locals, dead animals are cleared instead of left. Thereby depleting food for the Vulture and yet another species will be semi-free.
← Previous Post
Next Post →