Source to all birds on the Planet
Icteridae, Passeriformes
Comments 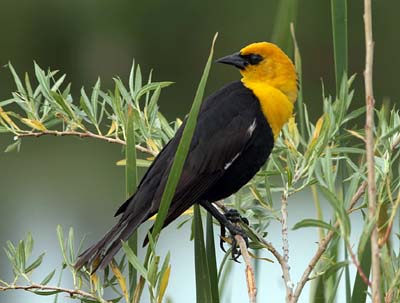 Listen to the sound of Yellow-headed Blackbird

Breeds in temperate Nearctic lowlands, favouring deep marshes fringing lakes and shallow river impoundments, where there are stands of cattail, bulrush, or reed. Forages in meadows and marshes, occasionally on grainfields and freshly ploughed land.

Adults specialize in aquatic invertebrate food during the breeding season, but consume primarily cultivated grains and weed seeds during the postbreeding period.

Adult males arrive about one to two weeks before adult females and begin forming territories shortly thereafter. Males are polygynous and generally have 1 – 6 females in a harem, and females select breeding sites within the male’s defended territory. The overwater nests are built entirely by the female, usually in water between 0.6 and 1.2 meter deep. Nests are constructed of water-soaked aquatic vegetation interwoven with standing dead or growing emergent vegetation. The nest is a deep cup built of long
stems and blades of wet partly decayed grasses woven around supporting stems to form a tight cup, lined with dead leaves of plants, coarse grasses, roots, and decayed plant material, and firmly packed with an inner lining of narrow leaves, leaf strips, or fine grasses. Clutch size is typically 3 – 5, but most often 4 eggs and rarely 5. Incubation is by the female alone and usually lasts 10 – 13 days. The young are altricial and brooded by the female exclusively. Females feed young at the nest, while males will assist in feeding after the young are about four days old. The young are fed invertebrates, primarily emergent aquatic insects (Twedt and Crawford 1995). Young leave the nest unable to fly at 9 – 12 days and remain among the emergent vegetation until flight is attained by about 20
days.

This species has a large range, with an estimated global Extent of Occurrence of 4,700,000 kmÂ². It has a large global population estimated to be 23,000,000 individuals (Rich et al. 2003). Global population trends have not been quantified, but the species is not believed to approach the thresholds for the population decline criterion of the IUCN Red List (i.e. declining more than 30% in ten years or three generations). For these reasons, the species is evaluated as Least Concern. (source Birdlife.org)