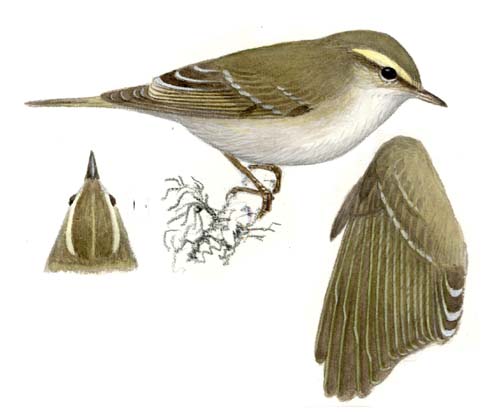 extends into Europe in northern Russia. Its European breeding population is small (as
few as 5,000 pairs), but the trend between 1970-1990 was unknown. No trend data
were available for 1990-2000, but there was no evidence to suggest that the species
declined. Although the size of the European population could render it susceptible to
the risks affecting small populations, it is marginal to a much larger non-European
population.
Phylloscopus inornatus has been split into P. inornatus and P. humei following Sangster et al. (2002).

Listen to the sound of Yellow-Browed Warbler

Breeds in central and east Palearctic over somewhat more northerly temperate and boreal range than Green Warbler, in contrast with it has not spread as far into west Palearctic. It appears, however, in strength of preference for open growth of broad-leaved rather than coniferous trees and shrubs. Limits of breeding range also suggest greater attachment to warm lowland, continental climate in northern areas, where common in belts of low birch, poplar, and willow, frequenting treetops. Often occurs in riverain forest.
In W Himalayas, optimum breeding zone is 2500-3000 m.

Insects and a few other invertebrates. Highly active when foraging, impression being enhanced by constant fluttering and wing-flicking which perhaps serve to disturb prey. Picks or snatches items from twigs and leaves of trees and bushes, sometimes after short flight. Often pursues insects in agile flight, during and twisting.

Breeds Jun-July in USSR. Nest site is on ground, in or against tussock, mound, windfall debris, or among tree roots. Nest is a domed structure with side entrance, of dry grasses, moss, rotten wood, plant fibre, and rootlets, lined with finer material. 4-7 eggs are laid, incubation 11-14 days, by female.

This species has a large range, with an estimated global Extent of Occurrence of 10,000,000 kmÂ². It has a large global population, including an estimated 10,000-70,000 individuals in Europe (BirdLife International in prep.). Global population trends have not been quantified, but the species is not believed to approach the thresholds for the population decline criterion of the IUCN Red List (i.e. declining more than 30% in ten years or three generations). For these reasons, the species is evaluated as Least Concern. (source Birdlife.org)

Migratory; winters from central Nepal (where uncommon), Sikkim, and Bangladesh east to eastern China, Hainan, and Taiwan, and south to Malay peninsula; by far commonest Phylloscopus species in Thailand and most common wintering warbler in Hong Kong. Leaves breeding grounds August-September, in north and west of range marked movement from mid-August; recorded on passage in Nepal mid-October to early November. Present in south-east Asia mainly mid-October to mid-April, and spring migration begins late March or early April; arrives from late May in western Siberia, at extremes of range in early June. Widespread autumn vagrant to central and western Europe (mostly mid-September to October in Britain and Ireland), with marked increase in recent years; now regular as far afield as southern Portugal.
Distribution map breeding season