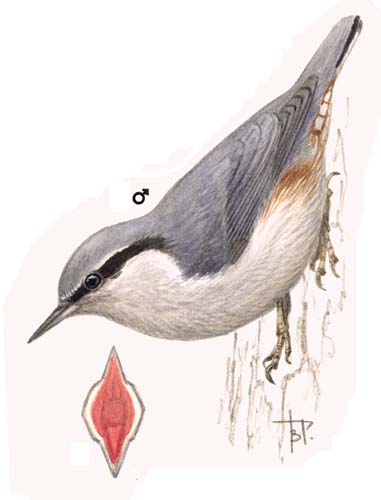 Medium-sized, perky, and noisy passerine, with compact, spear-headed and short-tailed shape balanced on strong legs and feet apparently set well back on body. Essentially blue-grey above and buff and/or white below, with quite broad black eye-stripe, and orange-brown rear flank and dappling on under tail-coverts. West, central and south-east European race has lower throat buff, and breast and belly orange-buff, merging into flank marked with orange and chestnut; Fenno-Scandian and European Russian race, nominate europaea has mainly white underparts.

Sitta europaea is a widespread resident across much of Europe, which accounts for
less than half of its global range. Its European breeding population is very large
(>7,500,000 pairs), and was stable between 1970-1990. Although there were declines
in a handful of countriesâ€”most notably Franceâ€”during 1990-2000, populations
were stable or increased across most of Europe, and the species remained stable overall.

Listen to the sound of Wood Nuthatch

In European Russia, breeds mainly in broad-leaved and mixed forest except in north, where nests readily in pure coniferous stands. In west European lowlands, however, closely attached to mature and well-grown or over-mature and even decaying deciduous trees with large trunks and of at least medium height, carrying well spread crowns with many branches and clusters of twigs, which are used for foraging no less than main trunks and boughs. Old open parkland also favoured, provided trees not too widely spaced (as birds normally make only short flights). In Britain and some other parts of range, prefers oak, but also favours beech and sweet chestnut. Readily tolerates human neighbourhoods and freely visits bird–tables in winter.

Invertebrates and (mainly in autumn and winter) seeds. Most food obtained on trees, from both trunk and branches; feeds also on ground, especially spring and autumn. Will take winged prey in the air. Seeds and large and hard insects are wedged into cracks or crevices and smashed. Caches seeds, especially in autumn.

Adult nuthatches live in male-female pairs permanently in the same territories after they became breeders. Young
nuthatches had two dispersal peaks; in summer, when they dispersed after becoming independent, and in spring, when those that had not found mates or territories during the winter moved again. Nuthatches most often occupied old holes of Woodpeckers to nest and more rarely natural cavities in dead trees (mainly larch and poplar), mostly where branches had fallen off.
Nuthatches narrow the entrance to cavities by plastering
mud around the margins. Both plastering and nest building is performed solely by females, while males sometimes bring pieces of nest material to their mates. Females use larch and birch bark flakes to build a thick base to the nest (4-10 cm). Some females use dry leaves. Nuthatches often use the same hole in more than one year. Clutch size ranges from 4 to 8 eggs which are incubated by the female only.

This species has a large range, with an estimated global Extent of Occurrence of 10,000,000 kmÂ². It has a large global population estimated to be 10,000,000 individuals (Matthysen 1998). Global population trends have not been quantified; there is evidence of population fluctuations (Matthysen 1998), but the species is not believed to approach the thresholds for the population decline criterion of the IUCN Red List (i.e. declining more than 30% in ten years or three generations). For these reasons, the species is evaluated as Least Concern. (source Birdlife.org)

Chiefly sedentary; limited dispersal, perhaps only of 1st-year birds. In some years (e.g. 1976, 1995), when populations are high, autumn dispersals can take on the characteristics of eruptions and invasions, with movements of thousands of birds in all directions from WNW through S to SE; ringed birds recovered at distances of up to 460 km.
Distribution map breeding season