Source to all birds on the Planet
Alaudidae, Passeriformes
Comments 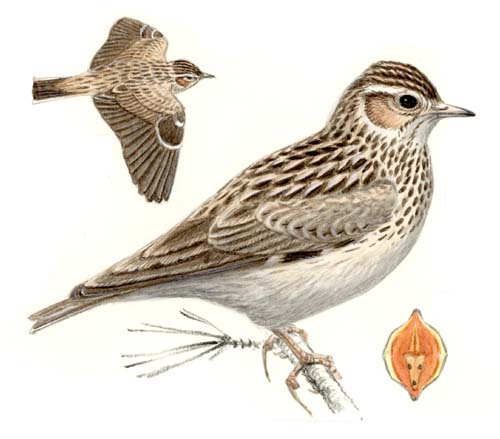 Smaller and more slender than skylark and crested lark. Plumage buff brown, upperparts and chest streaked, distinguished from other larks by broad, white supercilium which continues to nape. Black-and-white pattern of alula (first digit of wing) feathers very conspicuous. Crown feathers can be raised to a small crest.

Lullula arborea is a widespread breeder across much of Europe (except the far north),
which constitutes >75% of its global breeding range. Its European breeding population
is very large (>1,300,000 pairs), but underwent a large decline between 1970-1990.
Although declines continued in a few countries during 1990-2000, they abated across
most of Europe (the trend in Spain was unknown), and the species was stable overall.
Nevertheless, its population size remains far below the level that preceded its decline.
This lark inhabits north-western Africa and the Near East, but it essentially an European species, known from the Iberian Peninsula to Finland and from England to the Caucasus. It is wintering mainly in south-western Europe and the Mediterranean regions. It is breeding in open habitats with scattered trees and areas of short vegetation, in open oak (Quercus) or pine (Pinus) forest and young conifer plantings. The breeding population of the European Union is estimated at 1.3 millions of pairs, 90% of which inhabits the Iberian Peninsula. It is much fluctuating, according to available habitat and strength of winter conditions, but on the long-term it seems to be declining

Listen to the sound of Wood Lark

In breeding season the wood lark feeds on largely medium-sized insects and spiders. Outside the breeding season mostly seeds. Food brought to young, was collected from ground surface, uppermost layer of soil, and from low parts of plants. Feeding bird bustles about swiftly, pecking among plants and in earth. Rubs caterpillars repeatedly against ground. Most seeds swallowed complete with husks, but is able to remove husk by beating the seeds to the ground.

This species has a large range, with an estimated global Extent of Occurrence of 1,000,000-10,000,000 kmÂ². It has a large global population, including an estimated 2,500,000-6,500,000 individuals in Europe (BirdLife International in prep.). Global population trends have not been quantified; there is evidence of a population decline (Snow and Perrins 1998), but the species is not believed to approach the thresholds for the population decline criterion of the IUCN Red List (i.e. declining more than 30% in ten years or three generations). For these reasons, the species is evaluated as Least Concern. (source Birdlife.org)

Migratory in northern half of breeding range, partially so in central Europe and southern FSU, but mainly resident in maritime climate of western Europe and in Mediterranean basin (including North Africa). Winters within southern half of breeding range, or a little beyond it into Egypt and northern Middle East. Less conspicuous as a migrant than many other larks, since seldom forms large and compact flocks for diurnal passage.
Distribution map breeding season