Source to all birds on the Planet
Passeriformes, Troglodytidae
Comments 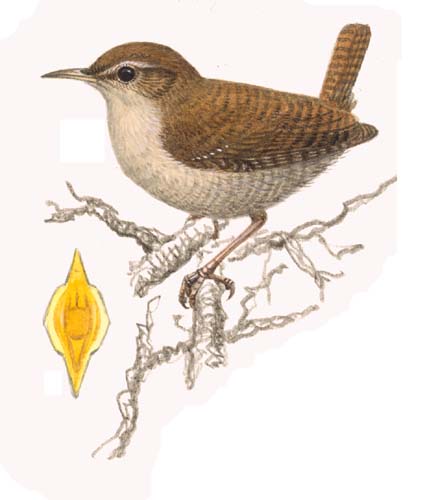 Not smallest but shortest bird in west Palearctic, due to habit of holding tail erect; appears about half size of Dunnock. Tiny, restless, and pugnacious passerine, usually seen at or near ground level and at any distance appearing warm brown overall. At close range, rather long, thin bill, pale buff supercilium, barred wings and flanks, and often cocked tail catch eye.

Troglodytes troglodytes is a widespread breeder across most of Europe, which accounts for less than a quarter of its global breeding range. Its European breeding population
is extremely large (>23,000,000 pairs), and was stable between 1970-1990. The species underwent a slight increase overall during 1990-2000, with populations across the vast majority of its European range-including the sizeable one in the United Kingdom-stable or increasing.
This bird inhabits most of Eurasia and North America. On the Islands north of Scotland it is represented by a number of races, one of the most distinctive being the race fridariensis, endemic to Fair Isle.

Listen to the sound of Winter Wren

Winter Wrens are found most often in closed-canopy conifer forests at all elevations, although they also live in other forest types as long as there is dense understory. Within these forests, brush piles, fallen logs, and stream banks are all good places to find Winter Wrens.

Insects and spiders are the predominant prey of the Winter Wren.

Males establish and defend territories and attract females by singing. Males may nest with more than one female at a time. Nests are built in natural cavities, usually within six feet of the ground. The cavities can be in upturned roots of downed trees or rotten stumps, old woodpecker holes, rock crevices, under porches, or any other low cavity. Male and female build the nest together on a platform of twigs. The nest cup is made of grass, weeds, moss, and rootlets, lined with hair and feathers. The male may build several dummy nests that remain unlined. The female incubates 5 to 6 eggs for 12 to 16 days. Both parents feed the young, which leave the nest at about 19 days.

This species has a large global range; the total size has not yet been quantified, but the Extent of Occurrence in Africa and the Americas combined is estimated to be 5,430,000 kmÂ². It has a large global population estimated to be 36,000,000 individuals (Rich et al. 2003). Global population trends have not been quantified, but the species is not believed to approach the thresholds for the population decline criterion of the IUCN Red List (i.e. declining more than 30% in ten years or three generations). For these reasons, the species is evaluated as Least Concern. (source Birdlife.org)