Source to all birds on the Planet
Galliformes, Phasianidae
Comments 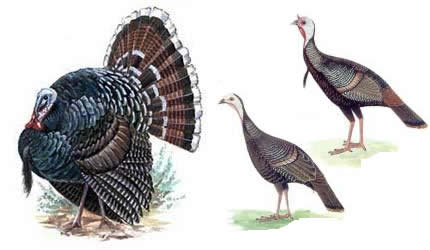 Its large body is a dark brownish-gray with iridescent black and green barring. Its small, unfeathered head and thin neck appear disproportional to its large body. The flesh on the male’s head is blue and red.
Wild Turkeys are most commonly found in flocks and are often seen walking across open fields. They typically get around by walking although they can fly and often roost overnight in tall trees. During his courtship display, the male puffs up his body and fans his tail.

This species doesn’t belong to the European fauna. It has been introduced from North America with some success in many parts of the World, e.g. in the Czech Republic where a small population was introduced in 1927, and amounted to 530 individuals in 1988. This population is surviving only with some artificial supply of food in winter. Other introductions in France, Germany and the British Isles failed

Listen to the sound of Wild Turkey

Forest patches with oak and Ponderosa pine produce food and cover for adults. Nearby grasslands provide an open area where the young can forage for insects. In this arrangement, the young stay hidden while the adults watch for predators.

A large proportion of the Wild Turkey’s diet consists of corns, seeds, leaves, grains, and berries. Insects and other invertebrates make up the remainder of their diet. Young birds primarily eat insects for the first few weeks of life, and then shift to a diet similar to that of the adults.

In the spring, the male attracts females by gobbling, puffing his feathers, spreading his tail, swelling his face wattles, and drooping his wings. Using this display, one male attracts several females. The female builds a shallow nest at the base of a tree or other dense vegetation, lining it with a small amount of grass or leaves. She lays 10-15 eggs and incubates them on her own. The young leave the nest shortly after hatching and feed themselves, although the female still tends them and broods them at night.

This species has a large range, with an estimated global Extent of Occurrence of 4,000,000 kmÂ². It has a large global population estimated to be 1,300,000 individuals (Rich et al. 2003). Global population trends have not been quantified, but the species is not believed to approach the thresholds for the population decline criterion of the IUCN Red List (i.e. declining more than 30% in ten years or three generations). For these reasons, the species is evaluated as Least Concern. (source Birdlife.org)

A North American species, formerly widely distributed east of Rocky Mountains, from Mexico to south Canada (Ontario), but range now much reduced and fragmented due to woodland-felling and over-hunting. Domesticated in Mexico and south-west USA, and imported to Europe from 16th century onwards. Various attempts made in last 100 years to naturalize in Britain, West Germany, Austria, Czechoslovakia, and Latvia (Fitter 1959; Glutz et al. 1973). Flourished lower Austria from 1880 to 1940s, though soon declined when protection and artificial feeding ceased in Second World War (last record 1947). All other introduction attempts failed within much shorter periods. No feral population exists in Europe at present time, though experiments continue in West Germany.
Distribution map breeding season