Source to all birds on the Planet
Cinclidae, Passeriformes
Comments 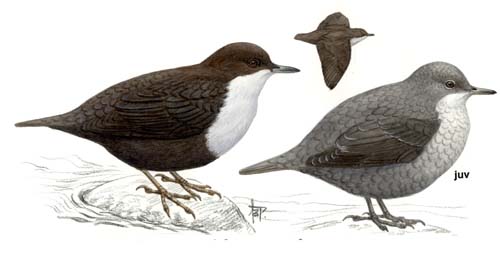 White-throated Dipper is a short-tailed bird. Head, nape and upper back are reddish-brown. Back is dark slate-grey, with dark scaly pattern visible at close range.
It has pure white chin, throat and breast, separated from the dark belly by a chestnut breast band.
Bill is blackish. Eyes are dark, with pale eyelid and whitish nictitating membrane, visible when it blinks. This membrane protects the eyes when the bird is submerged. Legs and feet are dark.
Both sexes are similar.
Juvenile is greyer on upperparts, with dark edges. Underparts are white, mottled with grey. Legs and feet are pinkish. It has dark eyes with whitish eye ring.
White-throated Dipper finds its food mainly in the water. It has no webbed feet, but it swims very well. It stands on a rock or a branch, often bobbing up and down while it cocks its tail, and when it locates a prey, it slips under the surface, and walks into the water, or even, it flies underwater. Its soft and dense plumage allows good insulation in the water where it finds larvae and small fishes. After diving, it may float downstream a short distance, with partly open wings, before emerging.
In order to slip under the surface, it holds itself down, with head well down and oblique position of its body, and once in the water, it grips with its strong feet and moves freely.
It also walks and runs on the ground, on the shore of the streams, to search terrestrial insects. When weather is too cold and water is frozen, it moves to lower altitudes to find food and open waters.
During courtship displays, male flies high above its territory, uttering its metallic notes “clink-clink-clink”, high pitched and repeated. Male also runs and exposes its white breast to the female. Pair stays together for one year.
White-throated Dipper is usually seen solitary or in pairs, but several birds may roost together in winter, in a sheltered place, such as under a bridge.

Cinclus cinclus is a widespread but patchily distributed resident in the more
mountainous areas of Europe, which accounts for less than half of its global range.
Its European breeding population is large (>170,000 pairs), and was stable between
1970-1990. Although there were declines in a few countries during 1990-2000,
populations were stable across the majority of its European range-including the
key one in Romania-and the species remained stable overall.
Numerous disjunct populations are found in hilly areas of Europe from Ireland, northern Norway, Iberia, central and southern Europe to Italy and Greece, Urals and Caucasus, northern Africa, Turkey, central Asia to Tibet and western China. Largely sedentary, but some Scandinavian birds winter in the Baltic States, Poland, and adjacent Russia, and the Urals population appears to be partially migratory

Listen to the sound of White-Throated Dipper

White-throated Dipper lives in fast flowing rivers and streams, and on lakesides. Populations move to lower altitudes in winter, and even to the coats and estuaries.

White-throated Dipper nests very close to the water, near the surface or at about 2 metres above, under a bridge. It also uses cavities in banks, holes in walls and old trees over water.
Both adults build the large domed nest, with mosses, dry grasses and leaves. But this construction is only a shelter. The entrance is hidden beneath a vegetal edge and there is the real nest, a cup of grass and sedges, lined with leaves, mainly oak leaves (quercus robur).
Female lays 4 to 6 white eggs, in March or April. Incubation lasts about 14 to 16 days, by female. Male approaches from the nest only when female leaves it to feed, and it surveys the nest site. Male may also feed the female at nest.
Altricial chicks are fed by both parents for a month. But young may leave the nest before, at 24 to 25 days after hatching.
This species produces 2 to 3 broods per season, and they reuse the same nest.

This species has a large global range; the total size has not yet been quantified, but the Extent of Occurrence in Africa alone is estimated to be 91,000 kmÂ². It has a large global population, including an estimated 330,000-660,000 individuals in Europe (BirdLife International in prep.). Global population trends have not been quantified, but the species is not believed to approach the thresholds for the population decline criterion of the IUCN Red List (i.e. declining more than 30% in ten years or three generations). For these reasons, the species is evaluated as Least Concern. (source Birdlife.org)

Title Biometric differences among the Dipper Cinclus cinclus populations of
Spain
Author(s): Francisco CAMPOS et al
Abstract: The length of the tarsus and wing, and the weight ..[more]..
Source: ACTA ORNITHOLOGICA Vol. 40 (2005) No. 2