Source to all birds on the Planet
admin
Emberizidae, Passeriformes
Comments 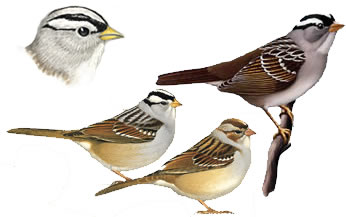 The White-crowned Sparrow is a distinctive bird with bold black and white stripes on its head. It has a clear, gray breast and belly, long tail, and wings distinctly marked with two white wing-bars. The beak is orange-yellow to reddish-brown depending on the subspecies. Young birds are streaked overall until August, when they take on a juvenile plumage similar to the adult; they have brown and tan head stripes rather than black and white, which they keep until the spring.
White-crowned Sparrows are generally found in flocks of their own and other species outside the breeding season. Flocks of White-crowned Sparrows fan out into open ground away from sheltering bushes as they feed, flying back to cover in a wave if disturbed. They forage on the ground in open areas, with sheltered thickets nearby for cover. They use a two-footed scratching maneuver to locate food in the leaf litter.

Listen to the sound of White-Crowned Sparrow

They require a patchy mosaic of bare ground and shrubby areas for breeding. Their territories are usually small, and they will breed in small patches of habitat in the middle of a city. During winter, they move into slightly more open habitats.

In the winter, White-crowned Sparrows eat seeds, grass, buds, fruits, and arthropods. During the breeding season, arthropods make up a larger proportion of the diet.

Males generally arrive on the breeding grounds before females. The males sing to defend their territories and attract mates. The nest is usually located on the ground at the base of a shrub or a clump of grass, in a depression so the rim is level with the ground. Nests on the West Coast are often placed in a shrub a few feet off the ground. The female builds the nest, which is an open cup made of grass, sticks, pine needles, rootlets, and bark strips and is lined with fine grass, feathers, and hair. The female incubates the 3 to 7 eggs for 11 to 14 days. Both parents feed the young, which leave the nest at 8 to 10 days after hatching. The young begin to fly about 7 to 10 days after leaving the nest and start finding their own food at about that time as well. The pugetensis subspecies typically raises 2 to 3 broods each year, while the other subspecies usually raise only one.

This species has a large range, with an estimated global Extent of Occurrence of 7,300,000 kmÂ². It has a large global population estimated to be 72,000,000 individuals (Rich et al. 2003). Global population trends have not been quantified, but the species is not believed to approach the thresholds for the population decline criterion of the IUCN Red List (i.e. declining more than 30% in ten years or three generations). For these reasons, the species is evaluated as Least Concern. (source Birdlife.org)

Status varies. Northern populations largely migratory. Other populations partially migratory to sedentary according to latitude; some make altitudinal movements. Winters from southern Alaska and southern Canada east to Newfoundland, south throughout USA to northern Mexico. Migration (both seasons) on broad front east of Rockies, with channelling through valleys in west, but movement along coasts is not typical. Frequent vagrant to Canadian and Alaskan Arctic; also recorded north-west to Pribilof islands, and (both seasons) eastern Siberia.
Rare vagrant to west Palearctic, especially in spring. 18 records from Britain and Ireland up to 1995, of which 14 in April-May and 4 in December-February; 2 birds present December-March. Individual recorded at Gibraltar 18-25 May 1986 coincided there with arrival of White-throated Sparrow.
Distribution map breeding season