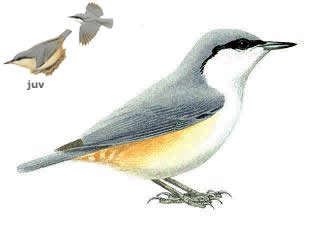 Sitta neumayer is distributed patchily across much of south-eastern Europe, which
constitutes >75% of its global range. Its European breeding population is very large
(>2,000,000 pairs), and was stable between 1970-1990. The stronghold population
in Turkey was probably stable during 1990-2000, and populations were also stable
(or increased) across the rest of its European range.

Listen to the sound of Western Rock Nuthatch

Breeds in and near west palerctic in warm Mediterranean lower middle latitudes of dry continental climate. Occupies sunny, generally calcareous rocky slopes and steep faces with at most some dry shrub vegetation.
Pronounced ground and rock bird, but in winter regularly in wayside shrubs and trees. Breeds in suitable isolated rocks at low levels but mainly on uplands and mountains to 1 km.

In summer, mainly insects, in autumn and winter, mostly seeds, but snails also important. Prey taken mainly on ground, especially in crevices in rocks, etc., sometimes from branches and trunks of small bushes or occasionally large trees, and sometimes take insects in the air.

Breeding starts late April to mid May in Greece, March-April in Israel, April in Iran. Nest site is built in slight concavity in rock face, usually sheltered from rain, or under overhang. Nest is an entire flask-shaped structure of mud, animal excrement, hair, plant resin, built against rock. 8-10 eggs are laid, incubation, 15-18 days, by female only.

This species has a large range, with an estimated global Extent of Occurrence of 1,000,000-10,000,000 kmÂ². It has a large global population estimated to be 130,000 individuals (Harrap and Quinn 1996, Snow and Perrins 1998). Global population trends have not been quantified, but the species is not believed to approach the thresholds for the population decline criterion of the IUCN Red List (i.e. declining more than 30% in ten years or three generations). For these reasons, the species is evaluated as Least Concern. (source Birdlife.org)