Source to all birds on the Planet
Ardeidae
Comments 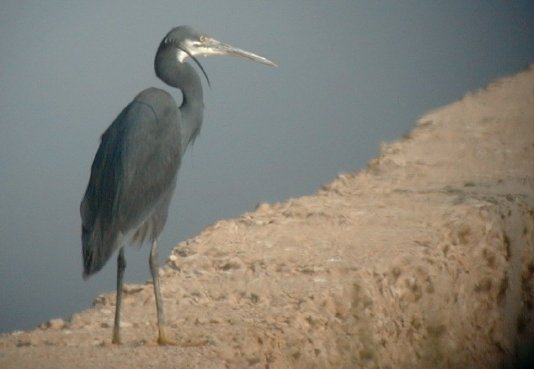 This bird has two plumage colour forms. There is an all-white morph and a dark grey morph; intermediate morphs also occur. The white morph is similar in general appearance to the Little Egret, but has a thicker bill, duller legs, and a less elegant appearance. The grey morph is unlikely to be confused with any other species within the range of this egret.

The Western Reef Heron, Egretta gularis, also known as the Western Reef Egret, is a medium-sized heron. It occurs mainly on the coasts in tropical west Africa, the Red Sea, the Persian Gulf and east to India. It has been recorded as a vagrant in the Cocos (Keeling) Islands, an Australian territory in the eastern Indian Ocean
No sound impression of Western Reef Heron

These birds stalk their prey in shallow water, often running or shuffling their feet; they may also stand still and wait to ambush prey. They eat fish, crustaceans, and molluscs.

Nests on ground or in reedbeds, bushes or trees up to 20 m also ledges or rocks or in mangroves.
2-6 eggs incubation 20-25 days, chicks have white down.

Title The Economic Impact of the Western Reef-
Heron (Egretta gularis) on the Town of
Kittery, Maine in August of 2006.
Author(s): Jeannette and Derek Lovitch
Abstract: The presence of a Western Reef-Heron in Kittery, M..[more]..
Source: The Wild Bird Center of Yarmouth