This plate is from around 1850, it was then called White-breasted Leucippus (Leucippus chionogaster) and the information states:

If this bird had been one of the most beautiful, instead of one of the plainest and most modestly attired species of the family, it could scarcely have received a greater degree of attention than has been bestowed upon it by the various naturalists interested in this group of birds; for, although a comparatively recent discovery, it has received no less than four specific appellations, and been placed in more than as many genera. Dr. Tschudi, its first describer, originally gave it the name of leucogaster, but that name having been previously employed for another member of the family, he proposed chionogaster in lieu of it; which term having the priority, is necessarily the one adopted. The native countries of this now very common bird are Northern Peru and Bolivia, over which it is widely dispersed. That its range in Bolivia extends to the distant Province of Charcas, is evidenced by the circumstance of my having received numerous examples from the neighbourhood of Chuquisaca. Mr. Bridges found it in abundance in the Valley of Cochabamba, where, he states, it feeds on insects and pollen, obtained from the flowers of the Lemon during the blossoming season of that tree : Humming Birds, however, by no means confine themselves to any particular tree or shrub, but pay their devoirs to each alike, as they successively come into flower; the blossoms of the thorny rock-loving Cactus yielding its contributions, as numerous trees indigenous to the country in which the bird is found.

The general colouring of the body is alike in all, but some of my specimens have the tail-feathers uniform dull gren, while in others, like those of Leucippus fallaoc, they are tipped with white: is the latter state characteristic of the female ? or is it due to youth or maturity ? In some specimens the white tipping is more extensive than in others. Possibly these differences may be indicative of two distinct species; but, in the absence of more conclusive evidence, I shall for the present consider them as identical. I must not omit to mention that, through the kindness of M. Louis Coulon of Neufchatel, I have been favoured with the loan of Dr. Tschudi’s original specimen, on examining which I find the basal portion of the tail-feathers white, and not the tips; and similar specimens are contained in my own collection; it is evident, therefore, that the colouring of the tail is by no means constant. The figures are of the natural size. The plant is the Echinocactus cinnabarinus. 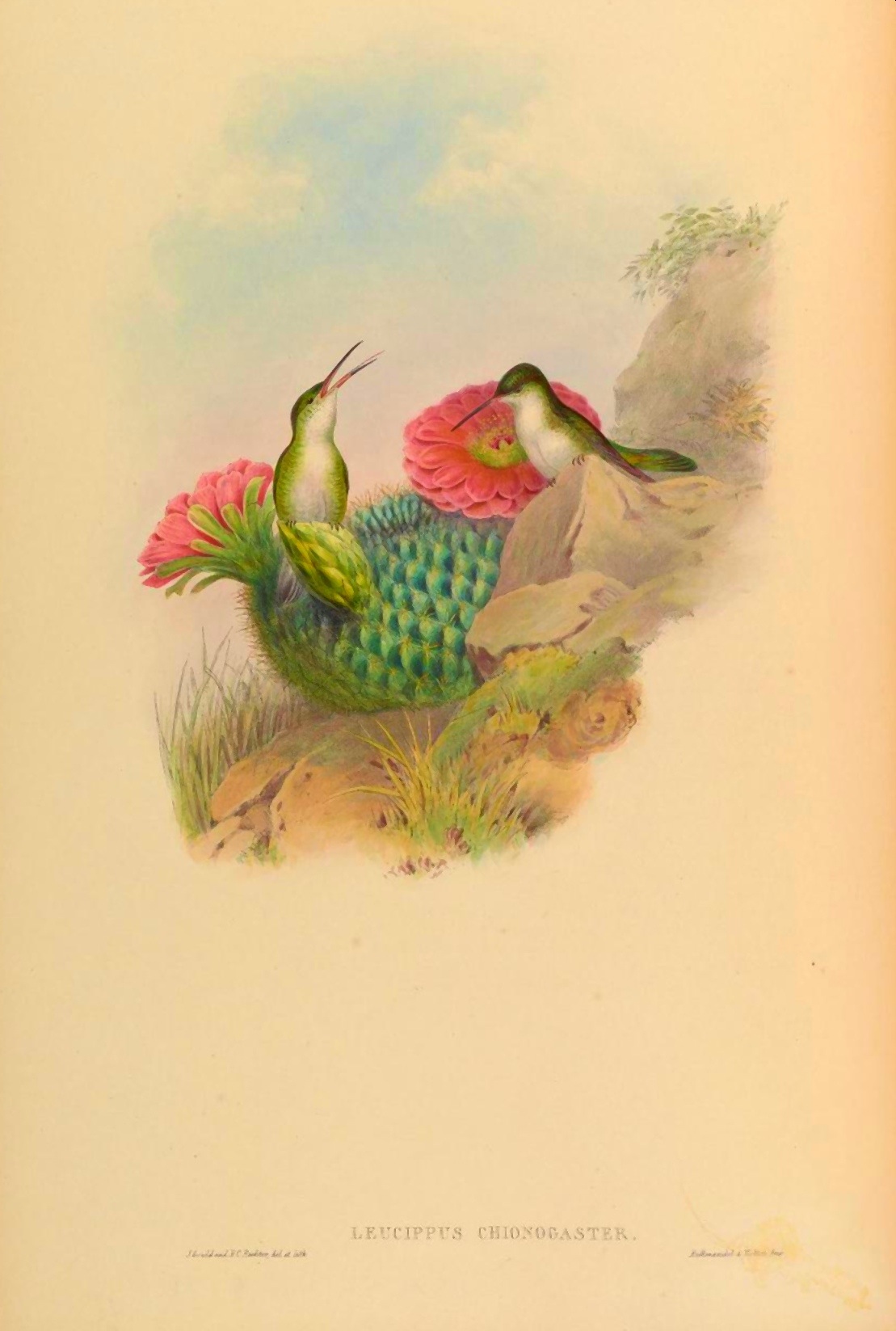