This plate is from around 1850, it was then called White-breasted Emerald (Thaumatias candidus) and the information states:

The Thaumatias candidus ranges widely over the southern parts of Mexico and Guatemala, and, judging from the number of specimens which have been transmitted to Europe through the instrumentality of De Lattre, Salle, Skinner, and Salvin, it must be a common species in those countries; at the same time, I doubt not that, like nearly every other member of the family, it is somewhat local. Mr. Salvin states, in the Ibis, vol. ii. p. 40, that it is “common on the Atlantic coast region, and thence one day’s ride into the interior;’ he also met with it in abundance in the Vera Paz Mountains ; and at page 170 he says :” This species, which is very abundant about Coban, is also found at Yzabal. Many species of Humming-Birds in Guatemala extend through a great range of temperature, the same species being frequently found both in the coast regions and also in the more elevated districts. The males of T candidus largely predominate in numbers at Coban ; of those actually dissected, the ratio is as seven males to one female.” Mr. G. C. Taylor states that he saw very few specimens during his stay at Honduras. Southern Mexico and Guatemala all the other members of the genus in the great amount of white on the breast and under surface, and by the absence of any luminous colouring on the other parts of the body.

All the specimens of this bird I possess are so much alike that I suspect dissection must be resorted to to ascertain which are males and which are females. The remark made by Mr. Salvin, that the females are much less numerous than the males, is, I doubt not, due to a separation of the sexes at the time of year Mr. Salvia was among them. In all probability, the males and females associate each by themselves during the winter months, and pair again, as usual with all birds, just prior to the breeding season. The accompanying Plate is intended to represent the male and female of this common but pretty species. The red flowering plant is inserted more as a contrast to the white breast of the bird than as one upon which it seeks its food; it is the Gesneria Schiedeana. 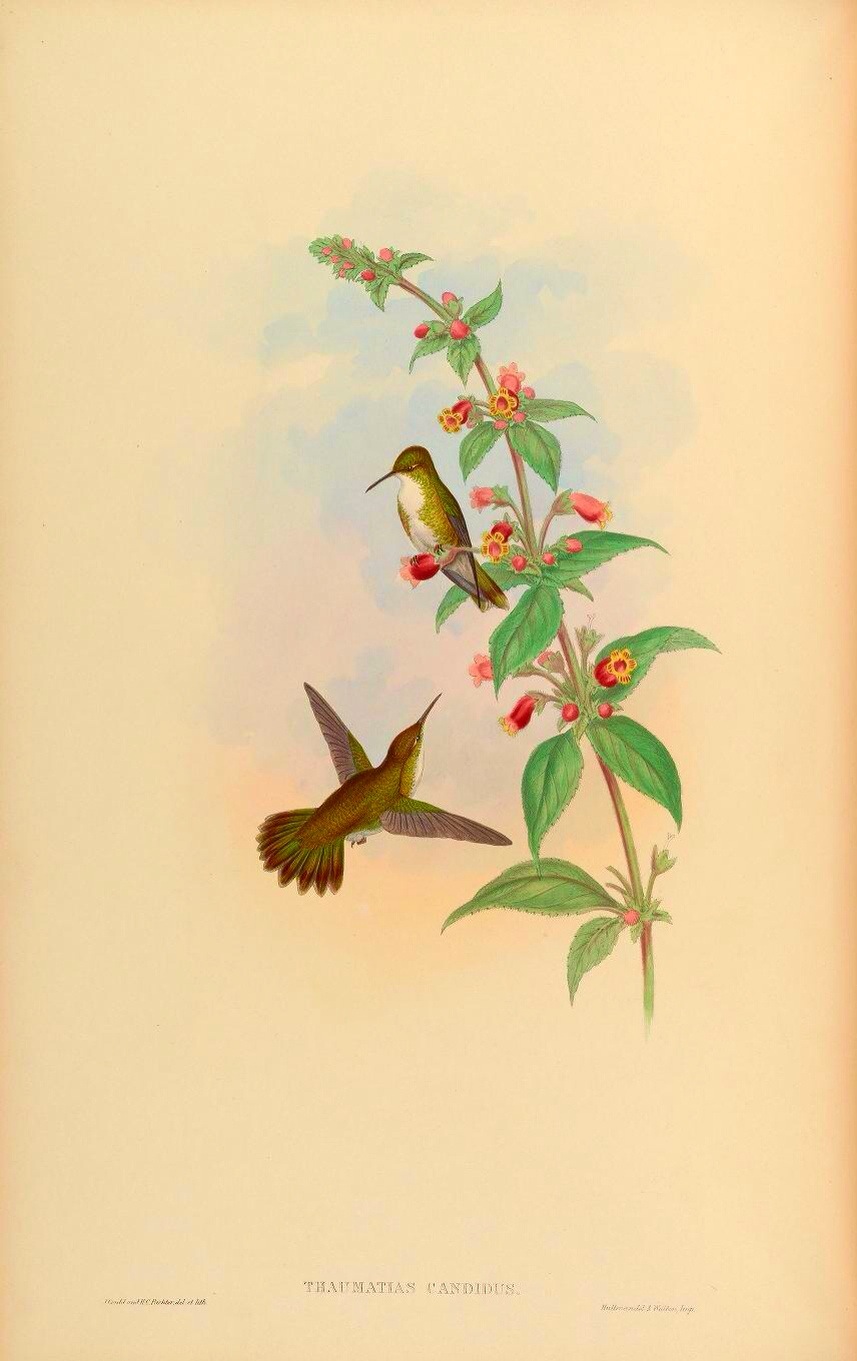 Head, all the upper surface, wing- and tail-coverts, sides of the neck, and flanks greenish bronze; wings purplish brown; two middle tail-feathers bronze, the remainder deep grey, glossed with bronze, and crossed near the tip with a band of reddish brown ; centre of the throat, abdomen, and under tail-coverts snowy white; bill black, except the basal two-thirds of the under mandible, which appears to have been reddish fresh colour.