This plate is from around 1850, it was then called Black-billed Azure-crown (Ornismya cyanocephala) and the information states:

So great is the confusion which exists respecting the synonymy and species of this form, that I might be held excused were I to give new specific appellations to at least two of them, namely the one here represented, and the one I have figured as Cyanomyia quadricolor; the case is very different with the C. Francice of M. Bourcier and the C. cyanicottis of myself, as the types of both of these are in existence and well known. Lesson states that the quadricolor and the cyanocephala both inhabit Brazil; but the truth is, that the form does not exist in that country.

The present bird, for which I retain the name of cyanocephala, rather than add another to the already too numerous synonyms of the group, like the quadricolor, is a native of Mexico and Guatemala: it is found rather abundantly in the neighbourhood of Orizaba, whence numerous examples have been sent to England by M. Botta, none of which offer the slightest difference from those collected in the more southern regions of Guatemala by M. Riviera Paz, and sent to me direct by Mr. Skinner. The Cyanomyia cyanocephala is not so finely coloured as the Bogota species. The only external difference observable in the sexes consists in the blue crown being nearly obsolete in the female. The figures are of the natural size. The plant is the Habrothamnus fasciculatus. 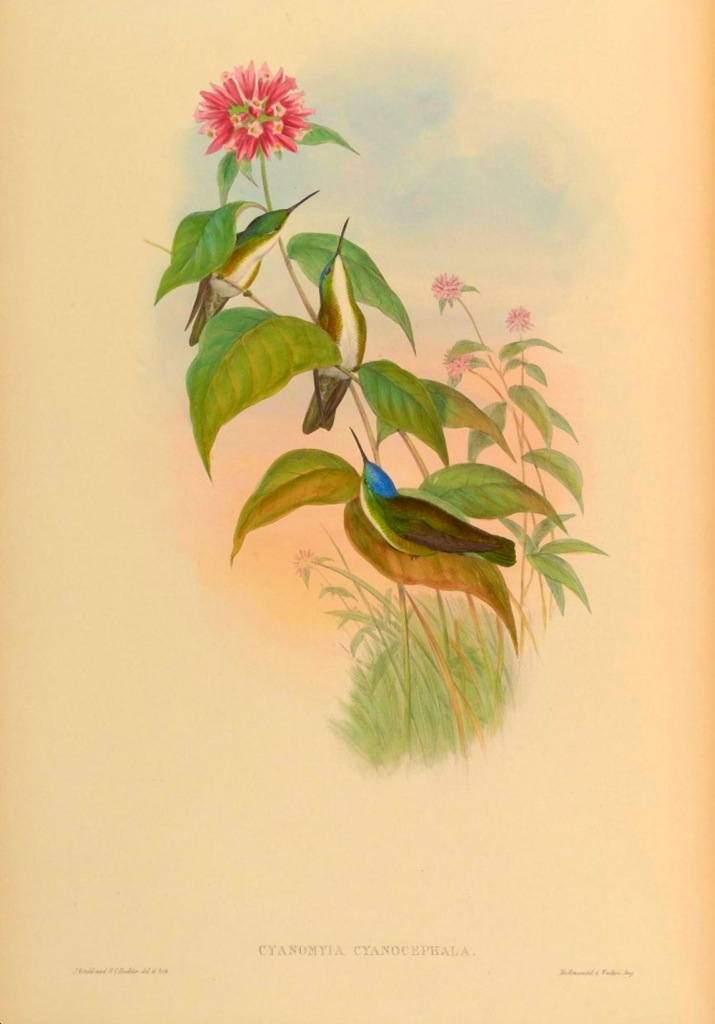 Crown of the head and occiput shining greenish blue; all the upper surface, wing-coverts, and flanks bronzy green ; wings purplish brown ; tail greenish bronze ; throat and centre of the abdomen white ; under tail-coverts greyish olive, fringed with white; sides of the neck green, but less brilliant than in others ; bill black.