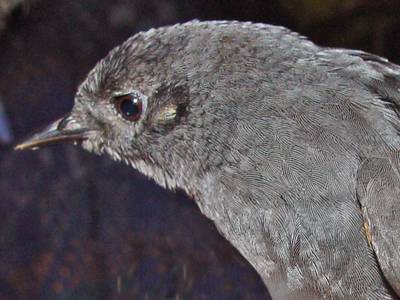 Typical Scytalopus tapaculo, predominantly slate-grey all over with some buff-brown barring on the belly. Similar spp lacks distinguishing plumage features. Best identified on voice. Voice the song is amongst the simplest of any Scytalopus, consisting of a single note repeated at a pace of 4-5 per second usually given in bouts of 2-5 phrases. Scytalopus rodriguezi was recently described from the head of the Magdalena Valley on the east slope of the Cordillera Central mountains of Colombia. It is known from two locations, the Finca Merenberg Natural Reserve, San AgustÃ­n municipality, Huila department, and SerranÃ­a de las Minas, a ridge 15 km SSE of Finca Merenberg. It was hypothesised that the species may also occur on the East Andes side of the valley; this seems to be supported by the recent re-examination of a museum specimen collected at La Palma, Huila, which is consistent with rodriguezi based on plumage and biometrics1. The species’s range is believed to be very small, with its stronghold centred on SerranÃ­a de las Minas. Much habitat at suitable elevations has already been cleared with an estimated 169 km2 remaining and deforestation continues, suggesting that the species may be declining rapidly. It inhabits dense understorey of primary humid forest at elevations of 2,000-2,300 m. It is frequently heard but rarely seen. Individuals move inconspicuously within 50 cm of or on the ground. It feeds on small insects. Deforestation is the principal threat to the species, at least in the short term. Selective logging, forest clearance to create pasture, and habitat degradation owing to trampling by free roaming livestock are the main drivers of its decline. Clearance in places of hundreds of mature oak and other hardwoods has drastically changed the forest physiognomy. Krabbe, N.; Salaman, P.; CortÃ©s, A.; Quevedo, A.; Ortega, L.A. & Cadena, C.D. (2005) A new species of tapaculo from the upper Magdalena valley, Colombia Bulletin of the British Ornithologists’ Club 125:93-108
download discovery article
← Previous Post
Next Post →