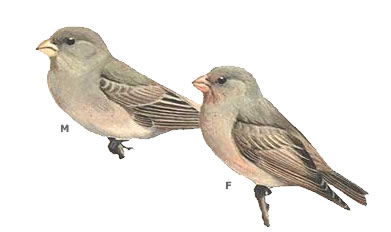 Bucanetes githagineus breeds patchily in the Canary Islands, Spain, Turkey, Azerbaijan
and Armenia, with Europe accounting for a tiny proportion of its global breeding
range. Its European breeding population is relatively small, but is now known to
exceed 10,000 pairs and was stable between 1970-1990. Although it may have declined
in its Canary Islands stronghold during 1990-2000, most European populations were
stable or increased, and the species probably declined only slightly overall.
This species inhabits northern Africa, the Near East and the Middle East, from Morocco to India. Being erratic in its distribution it is known from the Canary islands and the arid regions of south-eastern Spain. Its European population is estimated at 4100-5300 breeding pairs. The one of the Canary islands seem stable, but the recently discovered Spanish population is increasing.

Listen to the sound of Trumpeter Finch

Patchily distributed across warm arid mainly lowland or hilly subtropical regions from western Sahara across North Africa and Middle East. Concentrates in deserts, semi-deserts, and steppes with minimum of vegetation and much stony or gravelly surface, preferably fronted by rocky crags or vertical exposures with plenty of crevices and sparse growth of small bushes and grasses. Lives mainly on ground but requires daily access to water and is ready to fly some distance to it, especially towards evening. Tolerates very high daytime temperatures. Sometimes enters deep wells with walls, and occasionally nests in holes or gutter-pipes on houses, although normally far from human habitation except for remote guard-posts, where its confiding disposition leads to its readily making itself a home.

Seeds and other parts of grasses and low herbs; also a few insects. Forages almost wholly on ground, generally in rocky areas with scattered semi-desert vegetation; flits, creeps, and runs mouse-like around stones and shrubs searching for seeds. Digs fairly deeply into soil to find seeds, and perches on stems of grass to bend them over to get at seed-heads.

From early march (south of range) to early may (north of range), often second brood. The nest is a depression on ground under rock, shrub, tussock, etc., in cleft between stones, or in cavity in rock face or wall of house. Nest: untidy foundation of small twigs, stalks, roots, rough grass, etc., neatly lined with dry grass, plant down, wool, hair, and (rarely) feathers; sometimes lined with grass only. Clutch size ranges form 4-6, with an incubation period of 11-14 days and young fledge in 13-14 days.

This species has a large range, with an estimated global Extent of Occurrence of 1,000,000-10,000,000 kmÂ². It has a large global population, including an estimated 21,000-43,000 individuals in Europe (BirdLife International in prep.). Global population trends have not been quantified, but the species is not believed to approach the thresholds for the population decline criterion of the IUCN Red List (i.e. declining more than 30% in ten years or three generations). For these reasons, the species is evaluated as Least Concern. (source Birdlife.org)