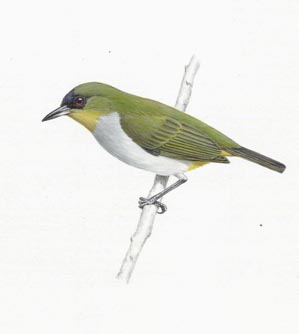 This new species is most similar to the Black-crowned White-eye (Zosterops atrifrons) but lacks the white eye ring which is narrow but conspicuous even in juvenile Black-crowned White-eyes. The Togian White-eye has a less extensive black cap, clearer yellow throat, distinct pale base to the bill and reddish (brown in the Black-crowned) iris. The species is separated from Zosterops surdus of the west-central Sulawesi by the paler and brighter olive above and clearer yellow on the throat. It differs from Zosterops subatrifrons of Peleng and Banggai Islands by the lack of the white eye ring, greyer breast and less extensive black crown. Its eye isn’t ringed in a band of white feathers like its cousins who flock in other remote tropical islands of Indonesia.
Yet it does have many features in common with the black-crowned white-eye Zosterops atrifrons of Sulawesi, which is clearly its closest relative. The new bird is believed to be endangered. The white-eye has been seen only near the coasts of three small islands of the Togian Islands in central Sulawesi. Unlike most white-eye species, it is evidently quite uncommon even in its very limited range. Considering its limited numbers and distribution, it falls into the World Conservation Union category of endangered. This finding also establishes the Togian Islands as an endemic bird area.
download discovery article
← Previous Post
Next Post →