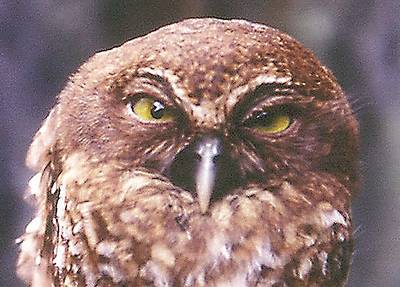 On Christmas night (25 December) 1999, in the village of Benteng on Togian Island, three unidentified hawk-owls were watched by torchlight, hunting from perches in a garden. They were medium-sized true owls, lacking ear tufts, with a dark, pale-scalloped mantle, darkish facial disc, grey bill, white underwings and undertail patterned with fine black spots, and pale underparts with broad pale brown streaks on the upper breast, becoming less dense on the abdomen. Ninox burhani is only known from the islands of Malenge, Togian and Batudaka in the Togian archipelago off central Sulawesi, Indonesia. Aural encounters, on Waleabahi Island to the east, believed to relate to this species imply it is widespread in moderate numbers throughout the archipelago. It may be declining but current trends have not yet been studied. A resident of lowland and hill forest it has been recorded in scrubby woodland surrounded by evergreen forest and also in mixed gardens and sago swamp, at elevations from sea level to 400 m. As the species is largely forest-dependent, continuing forest clearance represents a threat. (birdlife.org). Indrawan, M. & Somadikarta, S. (2004) A new hawk-owl from the Togian Islands, Gulf of Tomini, central Sulawesi, Indonesia Bulletin of the British Ornithologists’ Club 124:160-171
download discovery article
← Previous Post
Next Post →