It is said that among travelling pigeons the white ones are the chiefs of their communities. According to tradition, a white pigeon once flew into the forest lodge of a noted old man, the Wild Cat. The visitor did not appear ill at ease but stood in the lodge wherever it seemed good to him, and then without remark he flew away. The old man, Wild Cat, somewhat amazed by the quiet conduct of his visitor, related the incident to his neighbors, saying that this visit portended that something out of the ordinary was about to happen. But an entire year passed and nothing unusual had happened to old Wild Cat and his fellows and neighbors.

But at about the same season the next year the same White Pigeon again visited the old man’s lodge. At this visit the old man believed that the White Pigeon was a man (i. e., one of his own kind* of beings), so he conversed with him on many subjects. During this visit White Pigeon informed the old man, Wild Cat, that all the various tribes of birds had held a council at which it had been decided that the wild pigeons should furnish a tribute to mankind, because their Maker had selected the wild pigeons for this important duty as most other birds had only very little to give up because their mode of life required them to live dispersed here and there, and so what they had to offer could be obtained only with difficulty, while the others had nothing to offer toward the support of mankind. 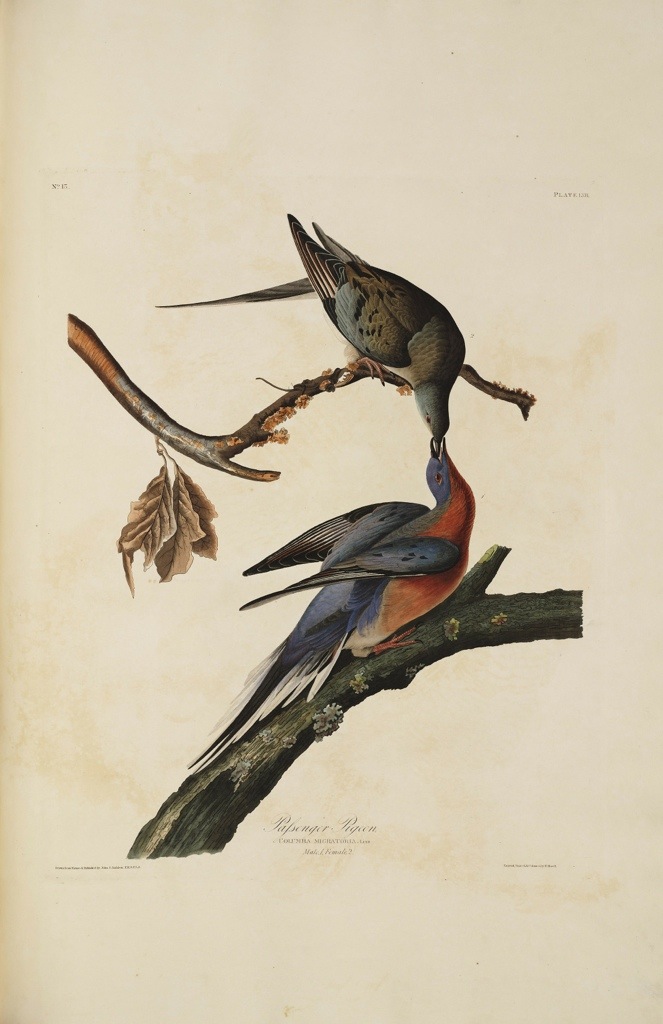 So, the pigeons being the only tribe of birds which built their nests and reared their young in a single community, it was resolved by the various tribes of birds that the pigeons should spare some of their young to men for food. White Pigeon continued by saying that he had come purposely to notify old man Wild Cat of this momentous decision, and to tell him the young pigeons were to be taken at the proper season, and the manner in which this must be done.

He said: ” In the season of the roost, when the young pigeons have attained a suitable size for eating, the people should select a suitable person as superintendent or master of the hunt, and he should give the needful directions to the people for making their preparations for the hunt before starting for the hunting grounds in which the pigeons have their roost in the forest.”

On such a hunting expedition the entire community was engaged, and so it was not unusual to have a very large multitude of people moving along a common path at this time. But to secure order and obedience certain rules for the march must be observed by all. Of these, one was that when the party halted to rest, to eat, or to camp for the night, the leader would place a rod, suitably painted, across the path, and no one was permitted to pass over it or to go around it for the purpose of continuing the journey regardless of the rest of the party. It was held that should one break this injunction some misfortune would inevitably befall the party. When the party was ready to proceed the leader would take up the rod and then the journey would be resumed.

Upon nearing the roosting place of the pigeons it was customary to make a collection of gifts from the people, consisting of various articles of ornament and trinkets of all kinds, for an offering to the pigeons. These freely given gifts were placed in a bark bowl and this was borne solemnly into the forest to some swampy place where tall weeds were plentiful, and these gifts were spread out on a piece of elm bark while native tobacco was burned and an invocation to the offering was made to the pigeons and their Maker. 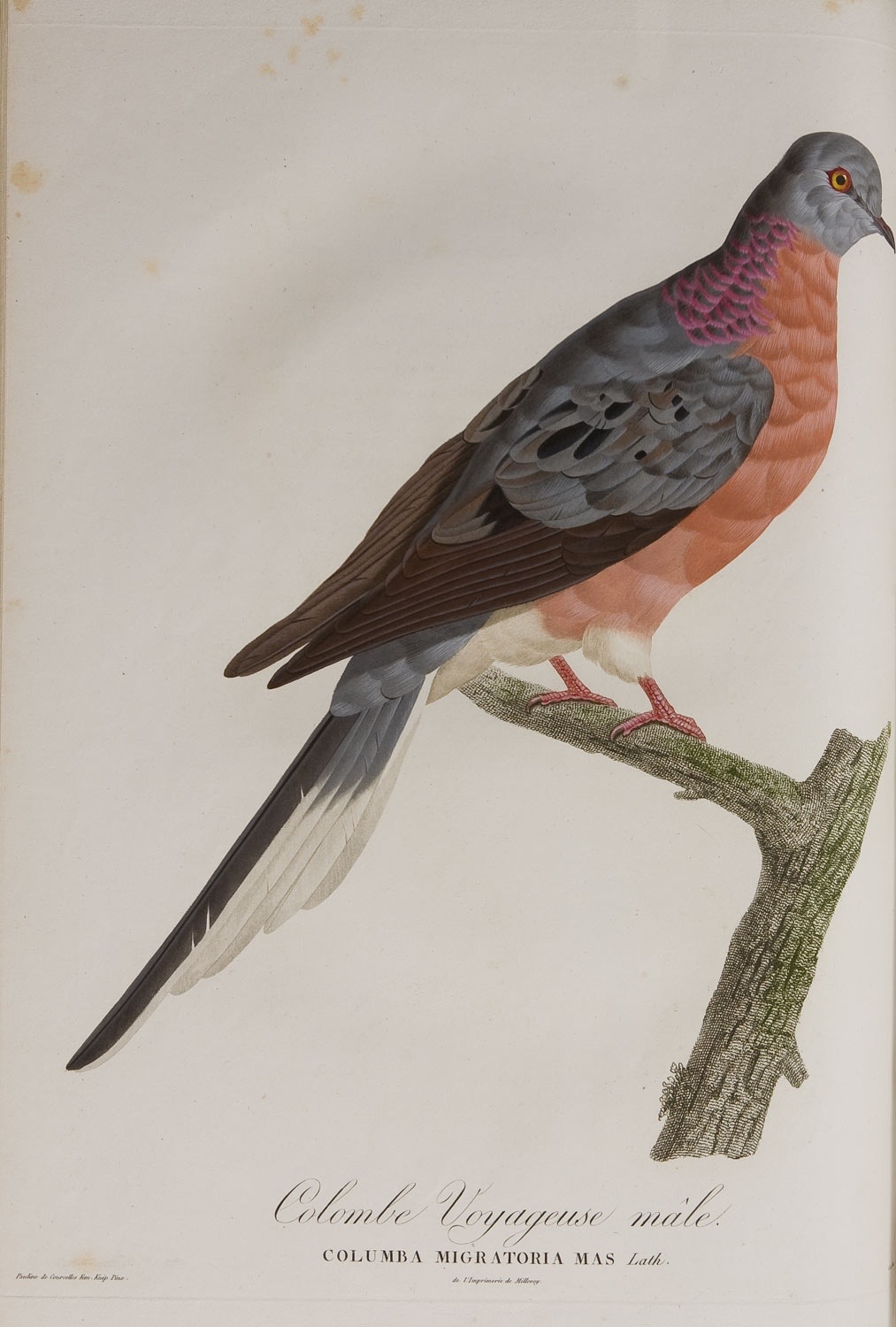 Tradition reports that for the first hunting expedition the people as a whole did not observe the rules of the master of the hunt, which he had learned from the White Pigeon. So some went around the painted rod placed across the path when the party halted for any purpose; others withheld presents from the offering, and many accidents happened to them; some broke their legs, others their arms, some fell sick, and some died. A great number of misfortunes befell the expedition.

After the expedition had returned to the home lands this fact aroused much discussion. So the old man, Wild Cat, questioned his people as to their conduct, and they informed him. He declared that they had brought these ills upon themselves and urged them to observe strictly the rule which the White Pigeon had given them for their guidance if they wished to avoid these’ misfortunes. So the following season the people went out to the hunt, but they carefully observed the rules laid down for their guidance and all went well, and so every spring for 20 years they continued to go out on these expeditions without any marked untoward events taking place.

But toward the end of this period many factions had arisen among the people. The young people asked, What is the need for these things? Pigeons may be killed at any time of the year. They are fit for food at all seasons of the year. What can pigeons do with these offerings of ornaments and trinkets which they are not able to wear or make any use of? Another faction of the people killed the pigeons wherever and whenever they found them, killing both the young and the old pigeons. Another faction boasted that its members had no faith in what was done, and so they had no desire to engage in pigeon hunting, even refusing to eat any of the pigeon meat when it was offered to them. But it was not long before’misfortune began to assail these seditious factions. The members of the faction which had refused to eat any of the pigeon meat died off one by one. Before the visit of the White Pigeon they never died, they seemed to be immortal; but now disease and death abounded among them because they had failed to obey the regulations prescribed by the White Pigeon for their guidance.