Source to all birds on the Planet
admin
folklore, Muscicapidae, Turdidae
Comments

The king of the birds, feeling one day in a good humour, wanted to find out which of his subjects could sing best. So he sent an order to his birds to select from amongst themselves those whom they thought to be the best singers. All the birds came together, and, after having heard many of the birds who said they could sing, they selected three from amongst them and sent up, as the best singers for the king to choose from, the yellow thrush, the blackbird, and the nightingale.

The thrush, with his beautiful golden feathers which glow in the light of the sun, was allowed to go first as the most beautiful of them; nay, he put himself at the head and walked first. The blackbird, which has a yellow beak, and whose feathers are shining like silk, walked immediately behind, whilst the little nightingale, small of build, with the drab-coloured feathers, followed meekly in the rear. When they reached the palace, the king, seeing how beautiful the thrush looked with his golden feathers, received him affably and placed him at the head of the table. The thrush, swelling with pride, began its song. The king listened attentively, and being pleased with the song he praised the thrush very much. Then came the turn of the blackbird; when the king saw it, he welcomed it and ordered a chair to be brought near the table. The blackbird took its place and started singing. It sang much more beautifully than the thrush. The king was very pleased, and he expressed his delight. 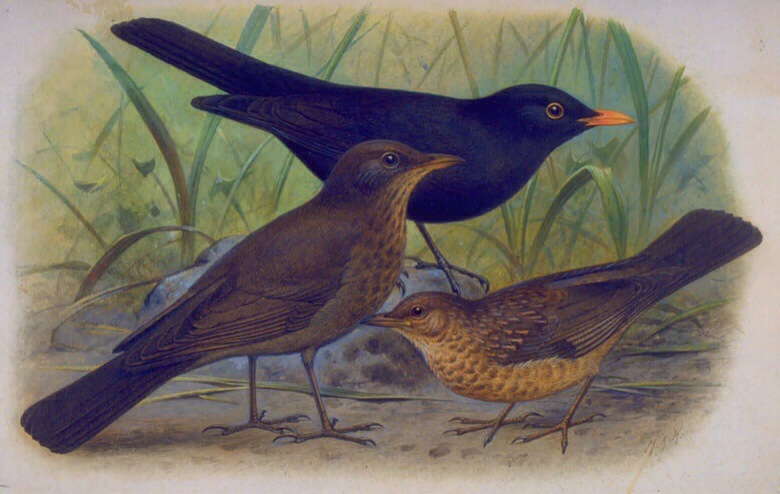 The last to come in was the nightingale. When it entered the hall, it bowed down meekly to the earth before the king, touching the floor with its little beak. When the king saw that little ungainly bird, so small and meek and skinny and of no appearance, he wondered what that bird wanted at the court, and somewhat angrily he asked:

â€œWhat do you want?â€ without even offering her a seat, as he had done to the other guests.

â€œMay it please your majesty, do not be angry with your servant; I have been selected by the other birds to sing here before your majesty.â€

â€œVery well then; sing, I will just see what you can do.â€

The nightingale, which did not even dare to look at the king, just cleared her voice and started singing as she alone knows how to sing, not like the others. When the king heard her singing, he was quite taken aback with the beauty and sweetness of her voice; he was full of admiration, for the nightingale had thrown the other birds into the shade (lit. had put them under the bushel).

When the nightingale had finished her song, the king did not allow her to stop in the doorway where she had been standing any longer, but called her up to the head of the table, and gave her the seat of the thrush, and, when the meal was over and all the guests rose from the table, it was the nightingale who walked first, and the blackbird, which sang better than the thrush, walked immediately behind, whilst the thrush, in spite of his grand array, now came third, feeling abashed and ashamed by his failure. And from that time onward the nightingale has been recognised as the best singer amongst them all, and all the birds must bow their heads before her.
← Previous Post
Next Post →