Googarh, the iguana, was married to Moodai, the opossum and Cookooburrah, the laughing jackass. Cookooburrah was the mother of three sons, one grown up and living away from her, the other two only little boys. They had their camps near a goolahgool, whence they obtained water. A goolahgool is a water-holding tree, of the iron bark or box species. It is a tree with a split in the fork of it, and hollow below the fork. After heavy rain, this hollow trunk would be full of water, which water would have run into it through the split in the fork. A goolahgool would hold water for a long time. The blacks knew a goolahgool, amongst other trees, by the mark which the overflow of water made down the trunk of the tree, discolouring the bark.

One day, Googarh, the iguana, and his two wives went out hunting, leaving the two little Cookooburrahs at the camp. They had taken out water for themselves in their opossum skin water bags, but they had left none for the children, who were too small to get any from the goolahgool for themselves, so nearly perished from thirst. Their tongues were swollen in their mouths, and they were quite speechless, when they saw a man coming towards them. When he came near, they saw it was Cookooburrah, their big brother. They could not speak to him and answer, when he asked where his mother was. Then he asked them what was the matter. All they could do was to point towards the tree. He looked at it, and saw it was a goolahgool, so he said: “Did your mother leave you no water?” They shook their heads. He said: “Then you are perishing for want of a drink, my brothers?” They nodded. “Go,” he said “a little way off, and you shall see how I will punish them for leaving my little brothers to perish of thirst.” He went towards the tree, climbed up it, and split it right down. As he did so, out gushed the water in a swiftly running stream. Soon the little fellows quenched their thirst and then, in their joy, bathed in the water, which grew in volume every moment. 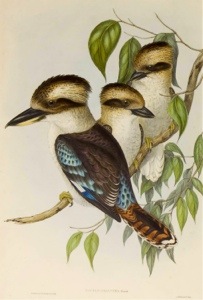 In the meantime, those who had gone forth to hunt were returning, and as they came towards their camp they met a running stream of water. “What is this?” they said, “our goolahgool must have burst,” and they tried to dam the water, but it was running too strongly for them. They gave up the effort and hurried on towards their camp. But they found a deep stream divided them from their camp. The three Cookooburrahs saw them, and the eldest one said to the little fellows: “You call out and tell them to cross down there, where it is not deep.” The little ones called out as they were told, and where they pointed Googarh and his wives waded into the stream. Finding she was getting out of her depth, Cookooburrah the laughing jackass cried out: “Goug gour gah gah. Goug gour gah gah. Give me a stick. Give me a stick.”

But from the bank her sons only answered in derision: “Goug gour gah gah. Goug gour gah gah.” And the three hunters were soon engulfed in the rushing stream, drawn down by the current and drowned.
← Previous Post
Next Post →