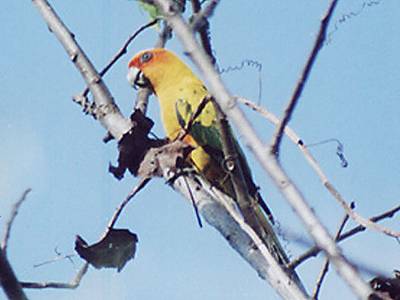 Sulphur-breasted Parakeet is a fairly common bird of open areas on the northern bank of the lower Amazon river in the state of ParÃ¡. Specimens of the new species have been present in collections at least from the beginning of the 20th century. One of the reasons that it took so long to be recognized as a separate species is that the specimens were long considered to be juvenile Sun Parakeets or hybrids between Sun and Jandaya Parakeet. On the other hand, specimens of both Sun and Sulphur-breasted appeared to be scarce in collections. Interestingly, collections in North America and Europe hold mainly Sun Parakeets, whereas the Brazilian collections hold almost exclusively Sulphur-breasted Parakeets. Most members of the Neotropical parakeet genus Aratinga have a predominantly green plumage. Parakeets of the Sun Parakeet A solstitialis species group, however, have bright yellow and orange colours on head and underparts. This group, also including Jandaya Parakeet A jandaya and Golden-capped Parakeet A auricapillus, occurs in dry areas in northern and central eastern South America. Sun Parakeet is known from a few localities in the Guyanas and in northern Brazil (states of Amazonas, ParÃ¡ and Roraima). Comparison of specimens from ParÃ¡ with birds from Roraima and the Guyanas showed considerable and consistent differences, and the ParÃ¡ population has recently been described as a new species, Sulphur-breasted Parakeet Aratinga pintoi (Silveira, L F, de Lima, F C T & HÃ¶fling, E 2005. A new species of Aratinga parakeet (: Psittacidae) from Brazil, with taxonomic remarks on the Aratinga solstitialis complex. Auk 122: 292-305). It is named after OlivÃ©rio MÃ¡rio de Oliveiro Pinto (1896-1981), who was in fact the first ornithologist to notice differences between A pintoi and A solstitialis. Diagnostic features include green mottling on the yellow crown and nape (pure golden-yellow in solstitialis), the green mantle and upperwing-coverts with distinct yellow suffusion and mottling (pure yellow in solstitialis), and the predominantly yellow underparts with pale orange restricted to flanks and belly (deep orange from throat to belly in solstitialis). Silviera, L., V., F. C. T. de Lima, and E. HÃ¶fling (2005) A new species of Aratinga parakeet (:Psittacidae) from Brazil, with taxonomic remarks on the Aratinga solstitialis complex The Auk 122:292-305