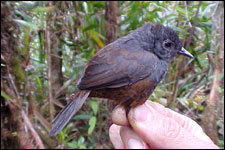 Stiles’s Tapaculo’s song is considerably faster and lower-pitched than that of the closely related Ecuadorian Tapaculo S. robbinsi. Furthermore, it is genetically distinct and retains its integrity throughout a 300 km stretch of the Cordillera Central where it occupies montane forest between 1,420 and 2,130 m altitude. In this limited area it is a common understorey bird and is known from 21 localities, including several protected areas.
Stiles’s Tapaculo is endemic to Colombia. It ranges in the northern half of the Cordillera Central of the Colombian Andes in the departments of Antioquia, Caldas and Risaralda, in cloud forests between 1420 and 2130 m above sea level. It was found at 21 sites on both slopes of the Cordillera Central. The song, calls and female song of the new species differ distinctly from those of all other known Scytalopus taxa. Phylogenetic analyses based on sequences of the cytochrome-b gene strongly suggest affinities with Ecuadorean Tapaculo S robbinsi of south-western Ecuador (first described in 1997) and with two as-yet-undescribed tapaculos from the Colombian Andes. Stiles’s Tapaculo coexists locally with – but ecologically segregated – from Northern White-crowned S atratus, Blackish S latrans and Spillmann’s Tapaculo S spillmanni. The mid-elevation premontane wet forests to which the new species is restricted have been subject to severe deforestation and fragmentation. The species is, however, relatively common in continuous mature-forest remnants, large primary-forest fragments, riparian forests and tall secondary-forest patches. The researchers employed a geographic information system (GIS) approach to model the potential distribution of the new species and assess its conservation status under the criteria of the International Union for the Conservation of Nature (IUCN). Stiles’s Tapaculo does not qualify as ‘threatened’ according to these criteria but it should be regarded as ‘near-threatened’. The new species coexists with numerous threatened bird species that are in need of more effective conservation.
Cuervo, AndrÃ©s M.; Cadena, Carlos Daniel; Krabbe, Niels & Renjifo, Luis Miguel (2005): Scytalopus stilesi, a new species of tapaculo (Rhinocryptidae) from the Cordillera Central of Colombia. Auk 122(2): 445-463.
download discovery article
← Previous Post
Next Post →