Source to all birds on the Planet
admin
Southern Ocean, Spheniscidae, Sphenisciformes
Comments 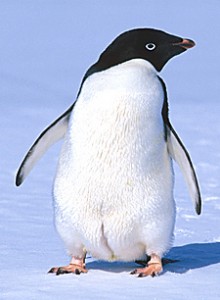 The Adelie has a black head. Distinctive white eye rings appear during the breeding season.

Listen to the sound of Adelie Penguin

Southern Ocean, Antarctica : widespread. All 17 species of penguins live in the Southern Hemisphere

Adelies often nest 50 to 60 km from the edge of the sea ice on the antarctic continent and nearby on rocky islands, peninsulas, beaches, hillsides, valleys, and other areas free of ice.

The pair share responsibility for the young, taking turns incubating the eggs and brooding the chicks while the other feeds at sea. Form crowded breeding colonies of up to a quarter of a million birds stretch over rocky coastal slopes. Lays 2 eggs, incubated in about 35 days, young fledge after about 53 days. Adelies build nests of small stones. They are known to take stones from other Adelie nests. A penguin returning to the nest sometimes brings its mate a stone as a courtship gesture.

Crustaceans (amphipods and krill); some fish and squid

Dwell between sea and colony.