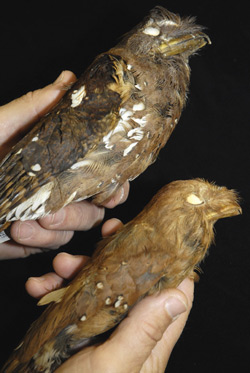 Originally, the bird was misclassified as a subspecies of the Australian Marbled Frogmouth, Podargus ocellatus. The blunder went undetected for decades, until a collecting trip led by Kratter in 1998 turned up a specimen on Isabel, a 1,500-square-mile island in the Solomons. The Solomon Islands Frogmouth differs from other frogmouths in a number of significant ways. First, it is probably not as accomplished of a flier because its eight tail-feathers, instead of the typical 10 to 12 on other frogmouths, curtail its lift potential, and its much coarser feathers reduce maneuverability. Second, it has distinct barring on the primary wing feathers and tail feathers, where other frogmouths are more uniform. Its speckles are larger, and the white spots on its breast and underbelly are more pronounced than on other frogmouths. Two other genera of frogmouths exist: one in southeast Asia and the other in Australia and New Guinea. The Solomon Islands Frogmouth is known to inhabit three islands: Isabel, Bougainville and Guadalcanal.
download discovery article
← Previous Post
Next Post →