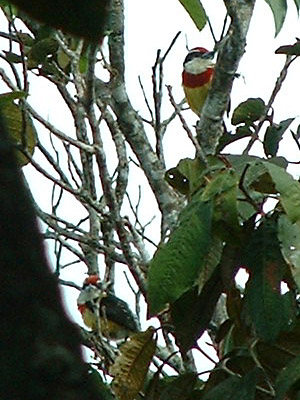 Capito wallacei is known only from an isolated, unnamed ridge system to the east of the Cordillera Azul, Ucayali Department, Peru. The ridge is on the east bank of the upper RÃ­o Cushabatay, 77 km west-north-west of Contamana in Loreto. The ridge is long (>50 km) and narrow and, in spite of searches at suitable elevations in the adjacent Cordillera Azul, this species remains known only from Peak 15382. It was found to be common, with up to eight individuals recorded daily. Thirteen specimens were collected from this mountain. 19 cm. Very striking, recently discovered barbet. Cap and nape scarlet. Broad white supercilium starting from just in front of eye. Black lores, area below eye and ear-coverts. Scapulars mostly black (yellow “V” in female). Back yellow, large white rump and black tail. Throat and upper breast white, bordered below by a broad scarlet band. Lower breast and belly bright yellow, fading to yellowish-white in undertail coverts. The species is known only from on, or near, the summit of one mountain, where a relatively flat plateau is cloaked in cloud forest between 1,200 and 1,540 m. Epiphytes, especially bryopytes, bromeliads and orchids, cover most of the trunks and large branches of the short trees (10-20 m). The predominant trees near the summit are melastomes and clusias. The forest floor has a deep (up to 1 m) spongy cover of mosses intermixed with leaf litter and soil. The wet, epiphyte-covered montane forest changes abruptly to taller and drier subtropical forest below 1,250 m. There is little human habitation in the watershed, and none above 300 m. Only a small amount of hunting is conducted by infrequent visitors. However, deforestation is extensive on the west slope of the adjacent Cordillera Azul, especially in the drainage of the RÃ­o Biabo. (O’Neill, J.P., D.F. Lane, A. W. Kratter, A.P. Capparella, and C.F. Joo. 2000. A striking new species of barbet (Capitoninae: Capito) from the eastern Andes of Peru. Auk 117: 569-577. )
download discovery article