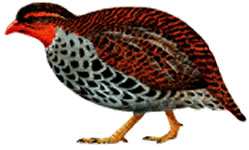 The Udzungwa forest partridge, Xenoperdix udzungwensis, is one of Africa’s rarest birds, considered threatened (“Vulnerable”, see BirdLife International, 2000) because of its very small range. The species is known from only three forests within the Udzungwa and Rubeho Highlands of the Eastern Arc Mountains in Tanzania. Xenoperdix obscurata is a small, approximately 29 cm long, boldly barred, brownish partridge with rufous face, grey underparts, olive-brown crown and upperparts. It has a red bill, brown iris and yellow legs. Both sexes are similar. It inhabits and is endemic to forests of the Rubeho Highlands in Tanzania. It was formerly considered to be a well-marked subspecies of the Udzungwa Forest-partridge, Xenoperdix udzungwensis of the Udzungwa Mountains, but is now recognized to be specifically distinct [1]). The diet consists mainly of beetles, ants and seeds. Due to ongoing habitat loss, small population size, limited range and overhunting, the Rubeho Forest-partridge is now endangered.
Bowie, Rauri C.K. & Fjeldsa, Jon (2005): Genetic and morphological evidence for two species in the Udzungwa forest partridge. Journal of East African Natural History 94(1): 191-201.