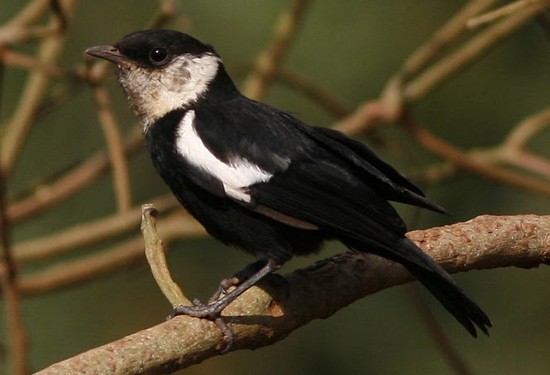 Geographically structured plumage variation among populations of White-headed Black Chat (Myrmecocichla arnotti) in Tanzania confirms the race collaris to be a valid taxon.

Roughly 40% of Tanzania is comprised of Miombo (Brachystegia) woodland interspersed with seasonal wetlands induced by restricted river flow. Some of these seasonal wetlands attain lakelike proportions during the rainy season and are extremely rich in birdlife. Other lowland habitats include: savanna, open grassland, riverine thickets, swamps and forest. Due to elevational relief and extensive periods of rain, many lower elevation ecosystems are difficult to access.
The patchwork nature of habitats has also resulted in common African species being less well-studied in Tanzania. One of these species is the White-headed Black Chat Myrmecocichla arnotti. This species is common in central Africa. However, given the patchwork nature of suitable habitat for this species in the interior of Tanzania, little detailed attention has been paid to the marked plumage variation in the populations in south-central Tanzania. This variation is only apparent in female birds, where birds distributed to the west of the
Eastern Arc Mountain massif differ markedly in plumage from those birds to the east of the massif. In this publication, we describe the dramatic difference in plumage pattern
among populations of M. arnotti in Tanzania and, together with molecular DNA sequence data, suggest that M. arnotti in Tanzania represents two different and incompatible species.

The females have a loud piercing territory call but seldom sing a harmonious tune. This is in contrast to the males who will sing for hours, as an apparent form of courtship display or territorial defence.

Young are incubated and fed from a nest located within a nest hole in a tree 1â€“4 m above the
ground. In a given year, young from both breeding seasons remain in the territory together
with the adult pair until the next season. During this period, all individuals are involved
in group-feeding and are vocal. Birds spend a considerable amount of time hawking insects. During feeding, they will always take a small hop forwards, bow the head with tail up, and flick the wings. If there is high food availability, it appears that female birds will typically not feed at the same time as the males, or will feed apart. The females seem to
chase off the young males if the young males do not observe this feeding practice. The adult male will always fly off if the female arrives and vice versa. Why they exhibit this behaviour is not at present known.