Source to all birds on the Planet
admin
Alcedinidae, Coraciiformes
Comments

The Sangihe Dwarf-Kingfisher has not been recorded since 1997 and it is probably in continuing decline because of habitat loss or already extinct. The species is described in Hume’s “Extinct Birds” published in 2012. Ceyx fallax and C. sangirensis were before 2014 lumped as C. fallax.

No recent surveys (f.e Riley 1999, Faustino 2003, Burung 2014), reported the species. It seems to be extinct on Sangihe, some suggest it might survive in dense patches of forest near urban areas. Hardly any natural forest is left on Sangihe. It probably occured at midlevel elevations, where recently forest has been extensively converted to farmland, in areas at 700-900 meters a.s.l.

Crown of head dusky-red, barred with ultramarine and lilac; no distinguishable loral spot, all the space between the base of the beak and the eye being rufous; cheeks and sides of head rufous with a brilliant lilac lustre; nape of the neck and middle of the back rufous; scapularies dusky rufous; lower part of the back and rump fuscous-brown washed with cobalt; tail fuscous-brown; wing coverts dull rufous spotted with lilac; wing-feathers fuscous-brown, the inner web rufous from the base towards the tip, the outer web of the secondaries rather broadly edged with dull rufous; throat and a patch of feathers along the side of the neck white; rest of the under-surface of the body orange-rufous, with a beautiful peach coloured lustre on the breast; bill and feet vermilion. 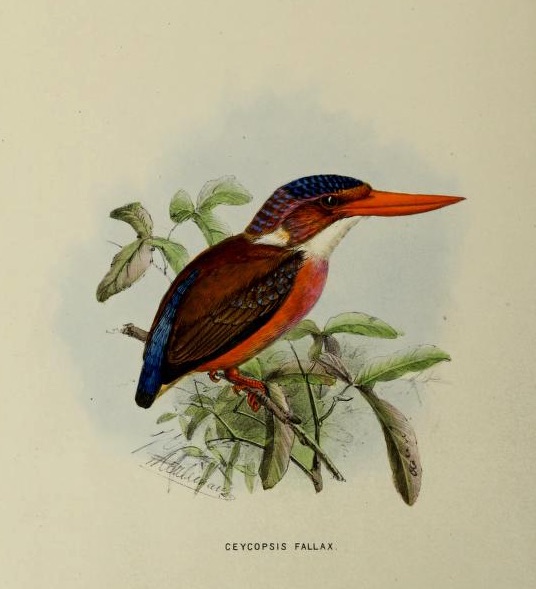 C. fallax from Celebes is smaller with the eye not connected to the dark crown, and the lower back, rump and uppertail coverts are bright turquoise.

Ceyx sangirensis is known from the island of Sangihe and, according to some, on the nearby Talaud Islands, Indonesia. The table below is taken from the Meyer and Wiglesworth book from 1898 and evidently reports sangirensis only inhabiting Sangihe. The past decades the question if the Sangihe Dwarf-kingfisher is to be found on Talaud has become more relevant. A second population would have great implications for conservation. 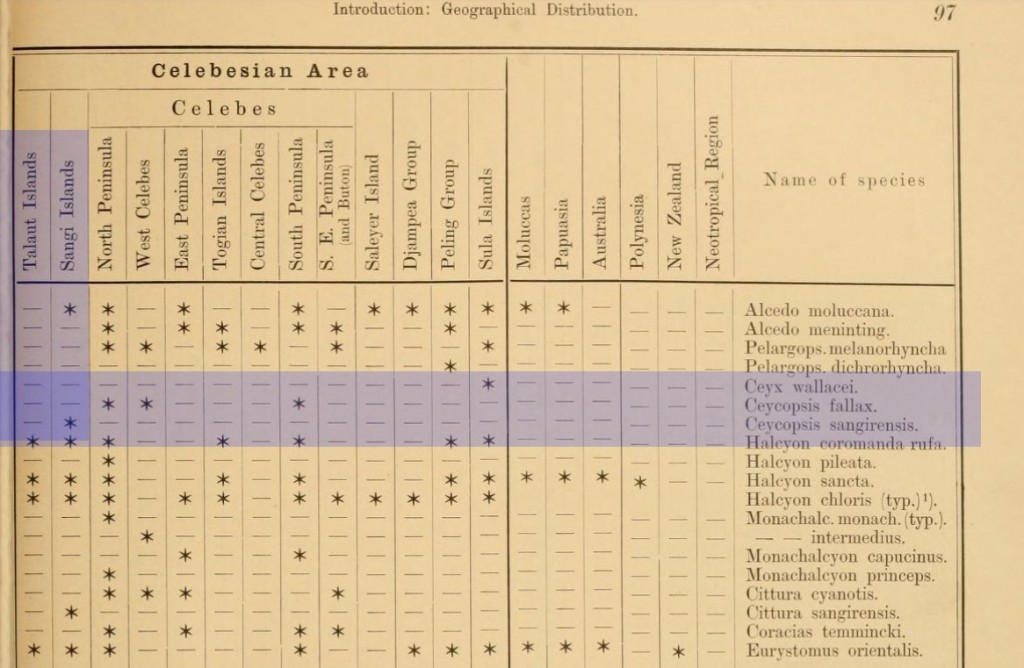 We, at planetofbirds think, the controversy originated from Meyer’s “The birds of Celebes and the neighbouring islands” Vol. II (1898) with the quote below. When read it implies the occurence of the species on Talaud.

Historically this remarkable Kingfisher was first made known to science by Professor Schlegel in 1869, from the island of Celebes. Schlegel states, that “this very rare little species is found on the borders of the creeks in the mountainous parts of the island of Celebes. Beyond this nothing is known respecting it”.
Meyer in 1879 wrote: “I got this species near Menado, near Gorontalo, and at the waterfall of Maros, in South Celebes; but I did not procure many specimens, perhaps for the reason that it lives in the forest and is a small species. Near Tabukan, on Great Sangi Islands, it appears to be plentiful. In May a living specimen was in my possession at Menado. The colours of this little species are very delicate. It is the loveliest Kingfisher of Celebes”.

The critically endangered status of C. Sangirensis is the result of the widespread deforestation of lowland Sangihe. Now the midlands have been deforested also and because no reports are made it is very likely this distinctive kingfisher has become extinct.
← Previous Post
Next Post →