This species occurs on one extremely small island and undergoes marked population fluctuations, owing to climatic events, reducing it to tiny numbers.
It is a 13 cm small, inconspicuous, thin-billed warbler. Brown above, darkest on crown, white below. It sings a simple song of rapid, metallic notes. 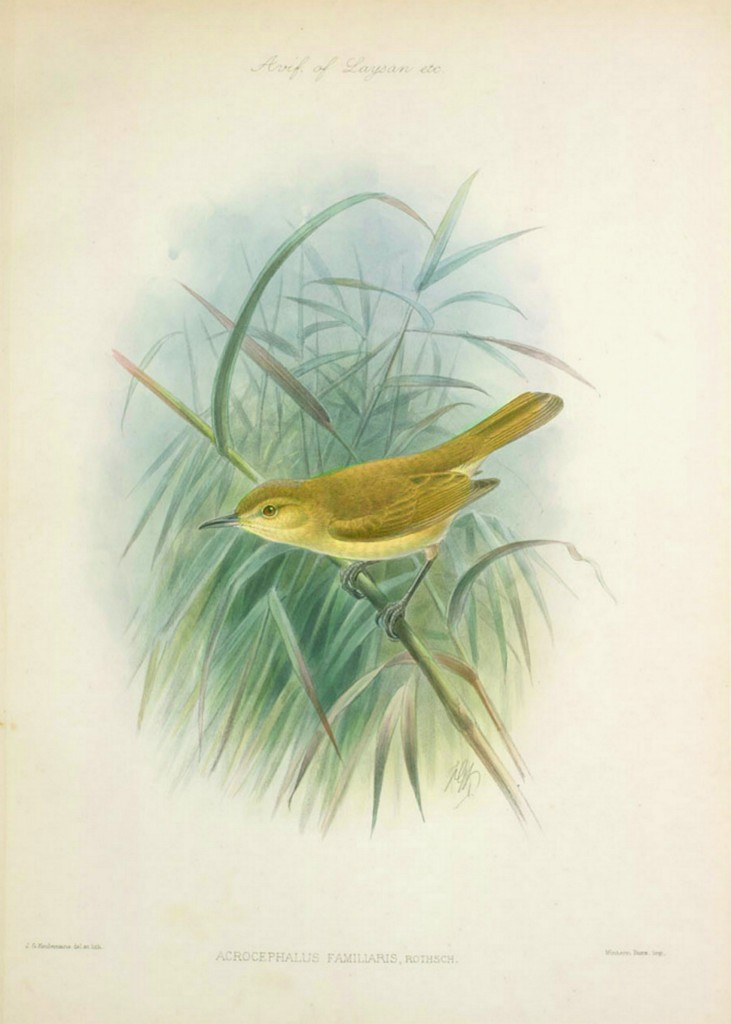 It is endemic to the steep, rocky island of Nihoa in the North-west Islands of Hawaii. It occurred on Laysan also, numbering about 1500 birds in 1915, but became extinct between 1916 and 1923. On Nihoa, Millerbird numbers fluctuate on Nihoa between fewer than 50 and more than 800 individuals, with the most recent estimates of 300-500 in September 2010 and 700-1000 individuals in September 2011. The number of breeders is estimated between 5 and 13 individuals. The vegetated area of Nihoa is just 0.43 square km (68% of the island), and Millerbirds are distributed patchily within this area. A first move was undertaken in September 2011 when 24 Millerbirds were transported from Nihoa to Laysan, a distance of 1,037 km. During the first breeding season on Laysan, the birds on Laysan produced at least five fledglings.

It prefers dense cover near the ground, particularly around the shrubs. On Nihoa the main foods include small beetles, spiders, roaches and larvae. It is thought to be a catholic feeder, feeding on the most readily available prey items. Nests are located in dense shrubs and two eggs are generally laid.

The extinction on Laysan in the early 20th century was caused by the introduction of rabbits and livestock, which ate the island barren of vegetation (severe declines in prey and habitat). On Nihoa, a single severe storm may extinguish the entire population as its range includes low-elevation habitat. Since the species has an extremely small range it is very vulnerable to extinction through disease like the West Nile virus and avian flu. Another threat are population peaks of grasshoppers which barrened 90% of the island’s vegetation, especially the shrubs in which Millerbirds build nests. Recent analysis indicates that the Nihoa millerbird is among the most genetically depauperate species ever recorded, which means very low in-species diversity and a major threat of inbreeding weakening the species genetics.

On Nihoa, the only safe haven left, access to the Island is controlled by a permit system that restricts access to biologists, researchers, and native Hawaiian practitioners. Strict protocols are followed to ensure that visitors do not introduce new species via seeds, eggs or arthropods travelling on clothes and equipment. For example, a chance vessel grounding or unauthorized landing on Nihoa that results in the introduction of rats could lead to the rapid demise of the Nihoa millerbird.

The Miller bird ranks in the top 20 of most endangered species in the world today. The SAP can be downloaded here,