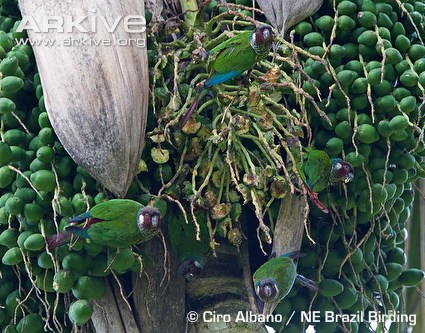 Listen to the sound of White-eared Parakeet

Tropical evergreen and deciduous forest and edge, and adjacent clearings with scattered trees and groves, ranging to c. 600m in Brazil but to 1700 m in Venezuela.

No data, in captivity clutch size is 5-9 eggs which are incubated for about 4 weeks by the female only. Young fledge after another 5 weeks

Fruits, berries, seeds, flowers, and insects and their larvae.

This species has a small and declining subpopulation in Brazil and a larger subpopulation in Venezuela. Habitat loss and degradation are driving moderately raid declines, particularly in Brazil. For these reasons it is considered Near Threatened.
Locally fairly common in Venezuela although race auricularis is suffering from habitat loss. Brazilian races are under major pressures since often confined in small unprotected areas. Recent data from south-east Brazil indicate that the species is fragment sensitive since it was the more abundant parrot in a large reserve, but it was absent in a small reserve and in forest fragments. No movements were carried out by the species out of the large reserve.

Some dispersive movements may occurr to and from deciduous habitats, resulting in occasional vagrant records in N Venezuela