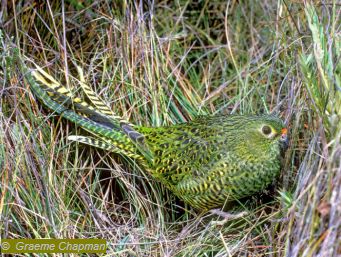 Australasia : Southwest Australia. Historically, this species was found all along the coast of western southwest Australia from Perth north to Geraldton and along the South Coast east to Israelite Bay. However, it appears to have vanished from the west coast of Western Australia by 1900. Nowadays, the range of this species is limited to two locations along the south coast of Western Australia, east of Albany with the largest population in Cape Arid National Park.

Low heathland usually on deep white sand with a large diversity of plants is the most common habitat. Parrots appear to be more abundant in heath which has not been burnt for decades, but have been found in areas six years after a burn. There is usually a fairly high component of sedges

Little is known about the breeding biology of the Ground Parrot, and most work that has been done concerns the eastern P. w. wallicus. The breeding season of P. w. wallicus varies geographically, beginning earlier in northern latitudes (eggs: Queensland, July-November; NSW-Victoria, September-November; Tasmania, October-January). However, the breeding season of the Western Ground Parrot is not known clearly. A nest was found with three eggs in late November 1913 and one with two young chicks (a few days old) in late October 1912, both east of Irwin Inlet, near Denmark. In contrast, in 1988, juvenile birds were common by late October in Fitzgerald River National Park. The clutch size of the Eastern Ground Parrot varies from two to six eggs with the majority having three or four. In eastern Australia Ground Parrot eggs have an incubation period of 21-24 days and are incubated only by the female, which is fed by the male during this period. Chicks are continuously brooded by the female for the first four days after hatching and during the night for a further two days, and are capable of running by 18 days, though they usually remain in the nest for 24 days (range 18-28 days). After fledging juveniles remain near the nest for at least three weeks, but once they are capable of flying they follow the adults. Estimates of fledging success show that less than two thirds of eggs produced fledged young.

The Western Ground Parrot usually feeds alone or with one other bird. Seeds of various plants especially sedges. e.g. Mesomaelaena stygia ssp. stygia. Flower buds and the base of flowers e.g. beaufortias, dryandras and grevilleas are also important parts of the diet. A Western Ground Parrot has been observed feeding on the semi-succulent leaves of Daviesia pachyphylla. The diet is varied and utilises the high diversity of their habitat.

Very rare in its range, not yet descrived by Birdlife
This species is among the rarest bird species in the world. The first photo of the Western Ground Parrot in the wild was taken in 2004. This species has rapidly declined between 1990 and 2009 from about 400 individuals to 110 individuals. Most individuals are found in the Cape Arid National Park. The species has not yet been evaluated by the IUCN, but it meets several criteria to be considered critically endangered. The main threats are introduced predators, such as foxes[ and feral cats, as well as wildfires. It is listed as “endangered” by the Australian Government. Much of the local vegetation is vulnerable to Phytophthora cinnamomi dieback and it is unclear what impact the loss of certain food items may have on the species.