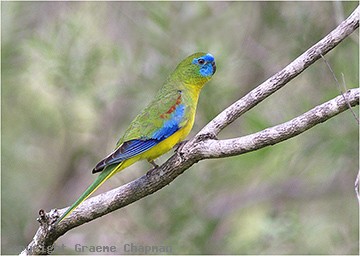 Listen to the sound of Turquoise Parrot

Australasia : Southeast Australia. The Turquoise Parrot is found from south-eastern Queensland, through New South Wales to eastern and north-eastern Victoria. The range was formerly more extensive.

Found up to 700m (2296 ft) in a range of lowland habitats including grassland, heathland, scrub, orchards, tree-lined creeks through farmland and woodland margins. Found in flocks or small groups foraging on the ground for seeds. Communal roosts are not uncommon. In some areas some birds may breed twice annually.

The Turquoise Parrot nests in vertical or near-vertical hollows in living or dead trees. The eggs are laid on decayed wood-dust or fine wood-chips. Leaves and grass may also be brought to the nest by the female. She carries these by tucking them under the feathers on her rump. Sometimes two clutches are laid in a season. Only the female incubates the eggs, but she is fed by the male who will also later attend to the chicks. Breeding season lasts from August to January. Clutch Size is 4 to 5 eggs which are incubated for about 3 weeks. Young fledge after another month.

Pairs or small parties of Turquoise Parrots forage mostly on or near the ground for seeds of grasses and shrubs. They also eat flowers, nectar, fruits, leaves and scale-insects.

This species has a very large range, and hence does not approach the thresholds for Vulnerable under the range size criterion (Extent of Occurrence <20,000 km2 combined with a declining or fluctuating range size, habitat extent/quality, or population size and a small number of locations or severe fragmentation). The population trend appears to be stable, and hence the species does not approach the thresholds for Vulnerable under the population trend criterion (>30% decline over ten years or three generations). The population size has not been quantified, but it is not believed to approach the thresholds for Vulnerable under the population size criterion (<10,000 mature individuals with a continuing decline estimated to be >10% in ten years or three generations, or with a specified population structure). For these reasons the species is evaluated as Least Concern.
The population is suspected to be stable. In Victoria, the species has adapted to a new food source, the seed of the cape weed, and is reported to be increasing although this may not be a range-wide phenomenon. The global population is estimated to be 20,000 individuals. Current threats include fox and cat predation, loss of hollow-bearing trees in forests managed for timber, and inappropriate burning that may favour a shrubby understorey over the grassy understorey the species requires.

Turquoise Parrots are generally resident in an area, but some local seasonal movement occurs.