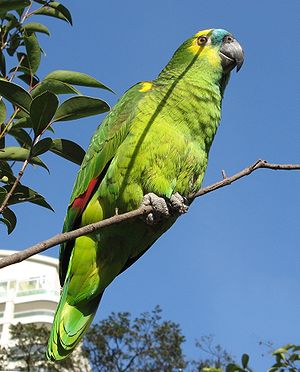 Like many Amazona species, the plumage is mainly green, with a largely yellow face, and a blue frontal band, as well as red speculum. There are two subspecies, and these differ most obviously in the color of the smaller wing coverts, red in the nominate race, and yellow (and forming a more extensive patch) in the southwestern subspecies.

Listen to the sound of Turquoise-fronted Amazon

Found in range of wooded habitats and open country with trees. Up to 1600m (5248 ft) in E Bolivia. Seen in communal roosts; found in pairs or flocks of several dozen birds. Sometimes seen quite close to human habitation.

The Turquoise-fronted Amazon nests in tree cavities. The oval eggs are white and measure around 38 x 30 mm. There are usually three to five in a clutch. The female incubates the eggs for about 27 days and the chicks leave the nest about 60 days after hatching

Takes fruit and seeds from wide variety of plants and trees