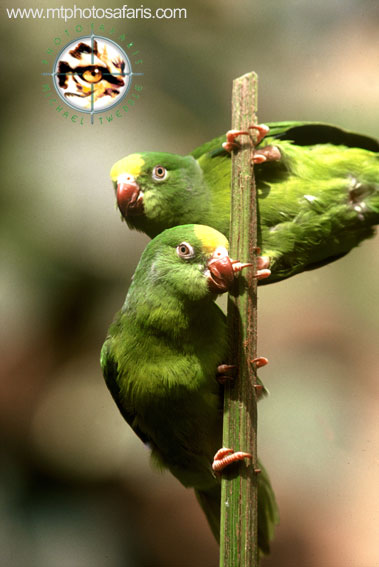 Brotogeris is a genus of small parrots endemic to Central and South America. The genus Brotogeris contains eight species, all of which are reported to use cavities in trees and termitaria. Brotogeris parakeets also use previously existing tree cavities and excavate cavities in the bases of palm fronds and rotting dead trees. In Brotogeris the oil-gland is wholly absent. The genus Brotogeris includes small and highly abundant neotropical parakeets, widespread over a wide range of habitats from dry savannas to rainforests. Such parakeets usually feed on soft and sweet fruit pulp, but also forage for diverse items such as nectar and seeds. In consuming these various resources they pollinate some tree species but, conversely, in drinking the nectar they destroy much of the flower crops.

The two subspecies differ only marginally in their head patterns, with the eastern taxon also having some yellow on the upper ear coverts, as well as the forehead. Both taxa are otherwise basically green, albeit with some yellowish or bluish elements.

Listen to the sound of Tui Parakeet

South America : Amazonia. Apparently disjunct populations (and separate subspecies) of the Tui Parakeet are found in upper Amazonia, from southeast Colombia south to northeast Bolivia and east across Brazil, and in the lower Amazonian basin of northeast Brazil.

The species is a locally abundant resident in riverine habitats, including seasonally flooded forests and second growth, but also in adjacent clearings and semi-open areas

Brreds in termite mounds as well as tree holes. Clutch size is 4-6 eggs which are incubated for about three weeks. The young fledge after another 6-7 weeks. One nest found showed young of varies ages, indicating the fledging period might be prolonged.

The Tui Parakeet feeds primarily on fruit, but has also been recorded visiting manioc fields and sugarcane plantations. Diet largely unknown but some birds have been observed taking Erythrina blossoms.