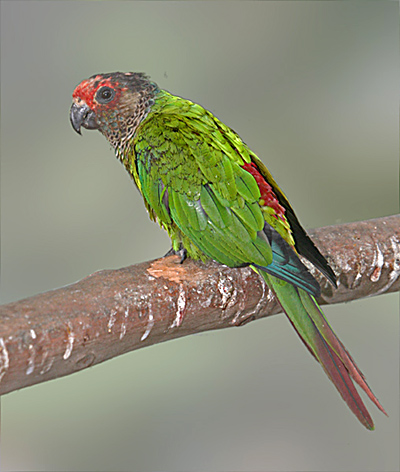 Listen to the sound of Rose-fronted Parakeet

The Rose-fronted Parakeet is widespread and fairly common in lowland evergreen forest, but the biology of this species is very poorly known. Found up to 1200m (3936 ft) in humid forest in foothills and in lowland terra firme and varzea forests; also in margins and adjacent clearings with tall trees. Seen in stunted forest along riverways with large bamboo patches.

Probably 5-7 eggs which (in captivity) are incubated by both parents. The nest is placed in a tree cavity.

Probably fruits, berries, seeds, buds, shoots and insects and their larvae. Seen in groups of up to 15 birds; inconspicuous while feeding or resting. Otherwise noisy and active in flight through or above forest canopy.

Not recognized by Birdlife
The taxonomy and nomenclature of Pyrrhura parakeets are complicated. The current classification of the Rose-fronted Parakeet is a good example of this confusing state of affairs. Rose-fronted Parakeet for many decades was classified as a subspecies of the Painted Parakeet (Pyrrhura picta), although the extensively red head of roseifrons makes its appearance seem very different from that of most members of the picta group.

Resident with some local and altitudinal displacements