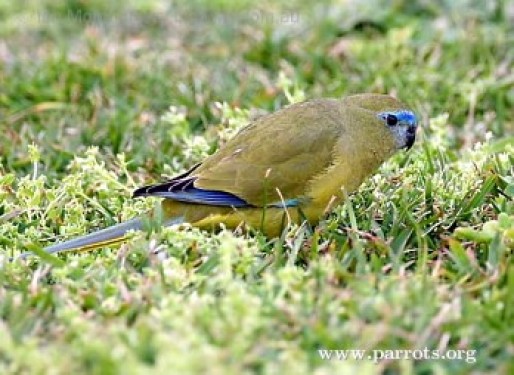 The Rock Parrot is a stocky, plump grass-parrot endemic to southern Australia. It has a dull brownish olive-green body shading to a yellow abdomen with a diagnostic blue forehead and face. The shoulders are narrowly edged in light and dark blue and it has a slender tail that is pale blue above and yellowish below. The Rock Parrot is tame, quiet and unobstrusive in its general behaviour. It rarely forms large flocks and is usually seen in small groups. The Rock Parrot is almost exclusively terrestrial but commonly perches in dense shrubbery and occasionally shelters under rocks.

Australasia : South, Southwest Australia. The Rock Parrot lives on the rocky coastline of south and west Australia. There are two major populations, in the east along the coast from Kingston to Ceduna in South Australia and in Western Australia from Cape Arid National Park to Geraldton.

The Rock Parrot is restricted to coastlines and offshore rocky islands, frequenting windswept coastal dunes, mangroves, saline swamps and rocky islets. It is seldom seen more than a few hundred metres from the sea.

The Rock Parrot breeds mostly on off-shore islands, nesting in a rock crevice, tunnel or abandoned seabird nesting burrow, or on a rocky ledge often behind a ‘curtain’ of succulent shrubs. The females incubates the eggs while the male feeds her by regurgitation, an act which is also ritualised in courtship. Breeding season is froms August to December, the clutch size iw 4-5 eggs which are incubated for about 18 days; young fledge after another 30 days.

The Rock Parrot feeds on seeds and fruits of a wide variety of grasses, rushes, shrubs and salt-tolerant plants. It forages quietly, mainly in the early morning and late afternoon.

The Rock Parrot is mainly sedentary, moving about locally in pairs or small flocks during the breeding season, but birds on offshore islands tend to disperse to nearby coasts in autumn and winter.