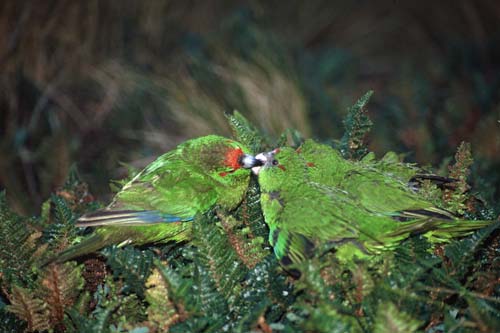 Species of the genus Cyanoramphus occur only in the New Zealand region and New Caledonia, except for two species known from the Society Islands, both of which are now extinct. They are small to medium sized parakeets with long tails and predominately green plumage. Most species are forest species, although several of the subantarctic species live in open grassland. The genus formerly had a disjunct distribution, with two species found in the Society Islands and the majority of the genus ranging from New Caledonia to Macquarie Island, but absent from the 4100 km in between. Despite many fossil birds being found in the islands between these two areas being found none of these were of undescribed Cyanoramphus species.

Found in open scrub and tussock grassland on Antipodes Island. These Islands are treeless, hence the birds terrestial.

Becuasethere are no trees or high cliffs available on the Antipides Islands, the birds make tunnels in the crown of large tussocks or clumps of ferns. Eggs 5-9 which are incubated for about 20 days; young fledge after another 5-6 weeks.

Feeds on fruits, seeds, leaves, buds, berries, flowers, nectar and shoots; also invertebrates, honeydew and seaweed and small limpets. feed actively in early morning, resting and preening during the day and feeding again in the afternoon.

This species is listed as Vulnerable as it is known from fewer than ten locations within a small and declining range. The extinction of its mainland populations effectively isolated the remaining island populations, and their effective population sizes are now several orders of magnitude smaller.
The species is adversely affected by forestry operations: clear-felling and burning have drastically reduced available habitat, and selective logging may reduce the number of trees with suitable nesting holes and foraging opportunities. Irruptions in the 19th century may have been caused by increased cultivation of crops by European settlers. It was hunted for food by Maori, and was formerly persecuted because birds damaged crops and gardens. It may suffer through competition for food or breeding sites with introduced species (such as Common Mynas Acridotheres tristis, Common Starlings Sturnus vulgaris, Eastern Rosellas Platycercus eximius, Crimson Rosellas P. elegans, Common Brushtail Possums Trichosurus vulpecula and honey bees Apis mellifera). Introduced predators such as cats, rats and stoats may also impact the species