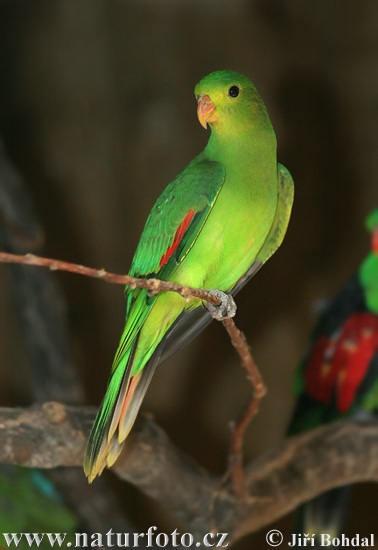 Aprosmictus is a genus of parrots in the Psittacidae family. Several former members, including the Australian King Parrot are now placed in the genus Alisterus. Red-winged parrots are native to Australia and Papua New Guinea. They are green plumaged with red wings, red on the primaries. They are the only parrot to eat upside down, and are known to be aggressive.

The Red-winged Parrot is a medium-sized, stout parrot and is the only mainly green parrot with large red shoulder patches. The male is bright lime green with a black back and deep blue rump. The tail is green with a yellow tip. The bill and eye are red and the legs are grey. The female is similar, but with a smaller wing patch and dark green back and a paler rump. Red-winged Parrots are usually seen in pairs or flocks. Their flight is distinctive, with deep, full strokes and a light and airy quality, pausing on each stroke. This species is also known as Crimson-winged or Red-winged Lory, Red Wing or King Parrot.

Listen to the sound of Red-winged Parrot

Red-winged Parrots are found in open, dry woodlands, timber-lined watercourses and arid scrub and sometimes in mangroves. They spend most of the day in trees.

Red-winged Parrots breed once each year. Eggs are laid in the hollow trunk of a tall tree, often near the ground. The nesting tree is usually close to water. The nest site may be a long way down from the entrance, which is high in the tree. Only the female incubates, leaving the nest to feed or to be fed by the male. Breeding season lasts from July to January; Clutch Size is 4 to 6 eggs which are incubated for about 20 days.

Red-winged Parrots feed on seeds, nectar, pollen and blossoms, insects and larvae. They forage in the canopy on outer branches of flowering trees and shrubs. They occasionally come to the ground to drink or to eat fallen seeds

The movements of Red-winged Parrots are not well known. They are considered partly nomadic in response to local conditions, searching for food and water.