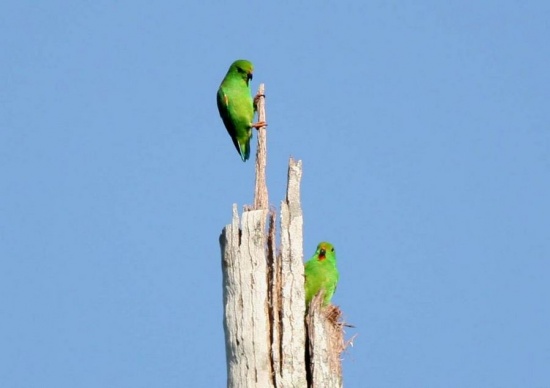 Male-red forehead and forecrown, extending to level of eye; dull orange/yellow back and lower mantle; carpal edge of wing orange/yellow and red; dark red spot on chin and throat; dark red rump and upper tail coverts, the red extending to tip of tail; tail green tipped green/yellow. Bill black. Eye yellow/white. Female-crown green; red spots on forehead; two to three irregular spots on throat. Eye brown. Young birds look like females, but the breast patch is yellow instead of red. The edge of the wing is greenish-yellow and the bill is horn-colored. Immature birds have pale brown irises and yellowish-brown feet.

Prefers primary and secondary forests in the lowlands up to 450m (1476 ft). Also found along forest edge, mangroves and coastal casuarinas, and at the edge of cultivated areas, around villages and sometimes in coconut groves. The global population size has not been quantified, but the species is described as moderately common, although rarer in Primary forest and commoner in secondary forest

Forages in tall flowering or fruiting trees. Seen singly, in pairs or in small groups. Keeps to the upper stages of the forest canopy. Noisy and conspicuous in flight. Feeds quietly amongst foliage.