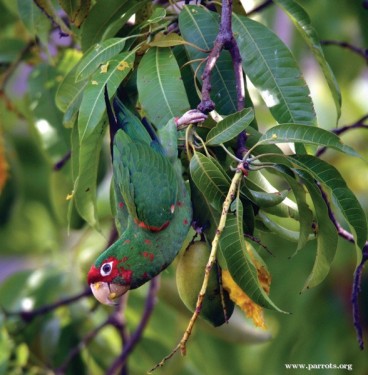 Listen to the sound of Mitred Parakeet

South America : Central Peru to Northwest Argentina. The Mitred Parakeet is a widespread and familiar parakeet of the central Andes, where it is common and widespread from central Peru south to northwestern Argentina; there also is a population, perhaps isolated, in northern Peru

In the northern portion of its range, this species primarily occurs at the borders of humid montane forest, and in the more humid portions of intermontane valley; in these regions it is replaced in drier mountain valleys by the Scarlet-fronted Parakeet (Aratinga wagleri). Farther south, where the Scarlet-fronted Parakeet does not occur, the Mitred Parakeet is more widespread in these drier montane forests. Seen generally in dry subtropical zones but also recorded from temperate areas such as montane deciduous forest, cloud-forest, cultivated fields, grassy hills with tall herbaceous plants, brush and scrub areas with scattered trees and legume-rich savanna.

Nests in tree hollows or even cliffs. Clutch size 2-3 eggs.

No details but berries and maize reported.

Probably somewhat nomadic in the post-breeding season. Has been reported amongst flocks of migrating species.